On Sunday, October 26, 2008, a three hour investigation of the historic Ryerson Theatre School (originally the Ontario College of Pharmacy, built in 1887) was conducted by an investigator of the Ontario Ghosts & Hauntings Research Society, and three Ryerson students; a journalism student writing an article on paranormal investigations for the school newspaper, and two photography students.

The investigator writes: "I intentionally did not read any reports on the site prior to this investigation to avoid the risk of experiencing anything that could be associated with any preconception theories. I knew nothing of the building whatsoever."

Upon entering the building, we explored the ground floor with a cursory walk through, concluding in a large room at the end of the entrance hallway that is a sewing/costume making room. John was immediately intrigued with the room and described a feeling of sadness that came over him then. This room was, according to unconfirmed historical reports that I found online afterwards, a morgue in the early days of the Pharmaceutical College. We decided that we would make this room our home base for the evening and set up the EVP equipment there which included the use of a parabolic microphone and recording equipment. Once set up, John and I discussed our approach to paranormal investigations with the students and answered their questions on the subject.

We set out to walk through the entire building with a portable tape recorder and camera equipment. We requested access to the boiler room (the door was locked) which is off the sewing room. We asked the security guard that unlocked the door if he had ever experienced anything in the building that he would consider irregular or unusual, to which he said that he had not. The boiler room is representative of what you may imagine in a building of this age: old, discoloured brick walls, concrete floor and dilapidated concrete stairs leading up and out to the rear of the building. Multiple furnaces and water heaters with cobwebs and rattling pipes, and duct work. The temperature in the room was oppressively hot. I did not feel anything in this room that I would consider unusual, out of place, or paranormal. 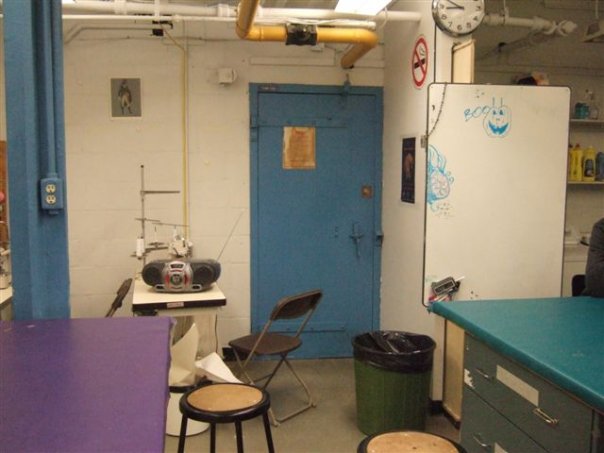 We made our way through the second floor which is mainly smaller classrooms, and for the purpose of the investigation proved uneventful. The third floor is home to the McAllister Studio, a grand room with high ceilings and ornate cross-beam structures across the ceiling that seemed out of place for a studio rehearsal room. Surely this room served another function originally, and I later learned (again, an unconfirmed online report) that it was an oral examination room where cadavers were worked on. The studio was empty except for an electric piano in one corner. I found myself drawn to that corner and while I cannot precisely pinpoint why, my attention remained there almost entirely. I left the room numerous times to explore other areas of the floor, and each time I returned to the studio, I was drawn back to that area of the room. For some reason I was fixated on that corner. I do not consider myself psychic or even sensitive, and when I described this unusual feeling to John, he too described a similar feeling associated with this corner. Oddly, there are multiple reports posted online about the studio that describe a similar sensation and experience within the studio. I found the correlation to my own experiences curious, especially since I had no knowledge of these in advance of the investigation. Perhaps there is an atmospheric or scientific explanation. More research would need to be conducted to explore this possibility. For now, it is an incident that I experienced and cannot explain. 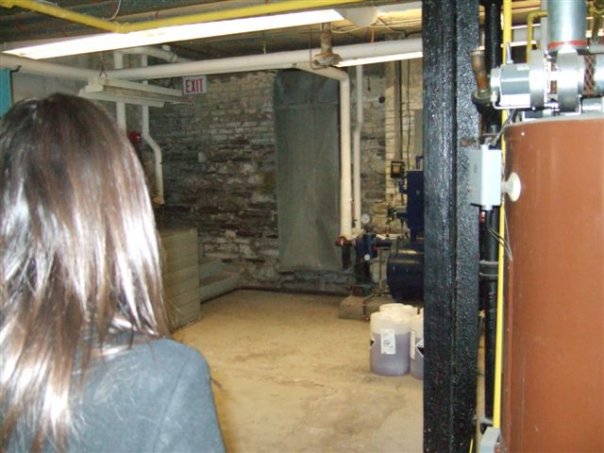 At 10:15pm John, the journalism student, and I returned to the sewing room on the first floor where we all experienced an event. We checked the recording equipment to see how much tape we had left and to ensure that it was running normally. While we stood there in complete silence, the monitoring needles on the equipment spiked to the maximum levels, something that should only happen if they were picking up significant audible sounds. We looked at each other and remained silent, while the needles continued to spike. There were no other obvious sounds, such as HVAC equipment for instance, in the room that may be immediately attributed to the cause of the spikes. This event remains under review.

Of significant interest, the same parabolic microphone and recording device recorded what sounds like a female voice, when there were no females in the room. At the time the recording was captured, earlier in the investigation, I was alone in the room with the two male photographers. While we carried on a normal conversation, I do not recall hearing a female voice say anything. This unusual and unexpected recording warrants further investigation and is also under review.

I am also adding to this article my findings I find Mike's report to be thorough and well written as well as accurate I have reviewed the audio recordings from the previous night and have found two different anomalous voices in the first recording the only female ( Chelsea) had travelled upstairs and was not in the room at the time the recording occurred just before I played back my own recordings. The phrase that was said was “Jesus Murphy” and again it was repeated directly after only softer and farther away,  I have asked Chelsea to confirm whether anything like this was said and I waiting for a reply. I found it odd that anyone would use this phrase as it was more popular around the 1950’s to 60’s.

Then as the Security guard was looking for a light switch in the morgue / boiler room area, you can hear two people talking one is a man then a woman. The first phrase was ( are you working in the night?) and the response from the woman was (Sue me!) . As far as the needles pegging It occurred during the whole second half of my recording The problem is indigenous to a bad capacitor which could cause equipment failure in the form of an underlying white noise. Having said that I found it odd that this had never occurred before and it did not occur on the first half of the recording.

Strangely I had mentioned to Mike the day before that I was halving trouble with my recordings and that something always comes up to ruin them I have been having trouble with this for about a year now and this just furthers my suspicions. (Divine Intervention?) during the white noise problems there were two abnormal things that happened no one was in the room during the time of the recordings However you can hear something clang my microphone and then rub there finger on the rim as something was curious about it this isn’t the first time this has occurred and I mentioned it that night. Unfortunately the white noise makes it difficult to distinguish so it cannot be used as evidence (This may possibly be the first time a "ghost" has used white noise to ruin an investigation rather than help it ) and then also I came back to the sewing room in the dark and asked why it felt so sad I asked if something happened to make it feel this way and immediately the white noise peaked my meters. Unfortunately there is no tangible evidence except for the EVP’S everything else can be attributed to conjecture by myself.