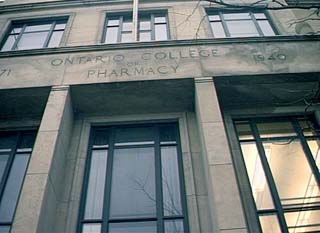 October of 2000 seemed to bring out the Ryerson school spirit more than ever!
This was sent to us by one of the school's students...

I wanted to add a bit of speculation to this story as well. I am a first year student there this year and lately the "theatre school ghost" story has been making it's appearances all over the campus' papers.

What I've read, learned and heard is that there is also a piano on the third floor, in the hallway between McAllister studio and the attic that has been heard playing by itself and a security guard apparently quit upon hearing this late one night. The costuming room on the first floor used to be a morgue and it is quite evident with the wider doorways (for the gurneys to go through) and the thick doors at the back which lead to the boiler room and, i guess, cold storage (which is a teacher's office now) The Abrams studio and McAllister studio were speculated to be where the pharmacy students autopsied bodies which explains the drains on the floor of the studio and the costuming room as well.

...and we also received this from a student looking for more information herself and was even involved in her own investigation...

I found myself drawn to the basement, I turned right into a large room (fortunately vacant at the time) and again right. I walked straight to a corner by a door and was immediately overwhelmed by the smell of formaldehyde. The others in the room (about five of us) also smelled it. I surmised that the chemical must have been slopped on the floor by the previous students.

There was a "hot" spot at waist level by this same area.I've only run across cold spots before and found this rather odd. I would appreciate feedback if anyone has ever encountered "hot" rather than cold spots.

We had the boiler room unlocked and proceeded to request a presence in the "cold" spot by the boiler. What resulted was "icy fingers" across the neck of one participant and a cold breeze across my right hand. The smell of formaldehyde was overwhelming.

Upstairs on the third floor, we found ourselves being told by a student that if you stayed alone at night in the MacAllister studio you will hear your name being called.

We walked around and found an attic opening with a sturdy metal ladder leading up. The first two participants went into the attic without incident, the third got stuck halfway up. The feeling was described as a paralyzing and predatory nastiness present. The other two unaware of anything also tried to go up and found it too uncomfortable to continue.

Being a 'skeptical believer', I took two other people there on separate occasions and told them how interesting the attic was and asked them to climb up. Both people stopped at the same spot and described the same horrific feeling while refusing to climb further.

One of the school papers reported that a security guard in the 80's smelled formaldehyde and heard a piano playing without anyone in the building. The next morning she resigned.

Although reports of the haunting have been a "female" entity. I had the distinct impression it was a male. This was confirmed by others present.

Just to fill in a bit of history on the building. It was the first College of Pharmacy in Canada and was built between 1885 and 1887. Several labour disputes slowed down the process. The founder of the College, E.B. Shuttleworth, had participated in the civil war. He was a chemist whose "pharmaceutical" degree and background was surrounded by controversy.Several people thought it was an "honorary" degree. I have found rough floor plans from archive sources and found that where we had gone in the basement was a 'recreation' area, however, there was also a hoist indicated on the drawing, this would have been used to deliver chemicals (source of formaldehyde smell?) and other things to the third floor. This was the 'hot' spot we were standing on. Also, MacAllister studio was the "oral" examination room for the college. It is a fairly safe assumption that cadavers were worked on and carried to the third floor via the hoist. This could also explain the "morgue" rumours on campus.


If anyone has any more information on this site or what might be happening, please contact us at This email address is being protected from spambots. You need JavaScript enabled to view it.