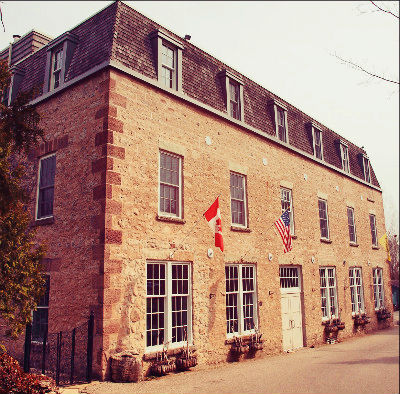 In February 2016 we receieved the following correspondence from one of our readers who kindly allowed us to share their experience with you.

I would like to report a phenomenon that happened to me and my wife on mid-October 2014 that I still keep thinking about it.

I booked a room in the Manor house of the Millcroft Inn hotel in Alton. The room was on the first floor (the first room on the right, entering the manor) to celebrate my wife's birthday and Thanksgiving in the same time.

The room has a second door that gives access to a little patio-garden outside.

After a great romantic dinner, we went back to our suite and went to bed. In the middle of the night my wife woke me up, freaking out as she was hearing someone scratching the patio door. I noticed the noise right away but it didn't scare me much at first, thinking it was may be a rodent outside.

During more than half hour, the scratchings were persistent, continuous and quite loud. A few minutes after I woke up, I checked the alarm clock, it was 2:17am. Pretty annoyed by the scratchings, I went to the door and it was clearly as if someone was scratching the door to enter the room.

The door has a curtain and at the precise moment I lifted it, I got suddenly enveloped by a freezing wind, that gave me goosebumps for a  moment. No one was outside and it was very quiet. When I lifted the curtain, the scratchings suddenly stopped but the freezing wind I felt crossing my body made me thinking that someone was entering the room through the door..and me! I also got invaded by a deep and sad feeling that almost brought me to tears.

My wife asked me what's happening and I remember that I didn't answer her as she was repeating the same question a few times, freaking out about my silence. I was completely petrified not much by fear but more by a very weird and sad feeling that left me confused and disoriented.

I remained at the door with the feeling that someone was begging me to stay there and talk to her. I say "her" because the feeling I had was like I heard a female voice somewhere in my mind (it wasn't my wife's voice for sure).

This situation lasted at least 10 good minutes. I never had any paranormal experience such as this one before.  I went back to the bed and tried to keep cold blooded in order to not freak my wife out even more. The scratchings never happened after that.

The only feeling that remained was that someone was in the room staring at us. My wife hid herself entirely under the blanket and I remained staring at the patio door. I could feel a freezing breeze on my face that lasted 15 minutes without any other noises.

I had the envy to speak out loud to this spirit but I was sure that my wife would get so mad that we would have to leave the room right away and get another room, not the ideal situation in the middle of the night, especially during a romantic/birthday getaway! So I remained silent until the morning.

At breakfast time we reported the phenomenon to the staff and the waitress told us that there are at least 2 ghosts in the hotel. One is apparently a young lady in the early 20th century that was locked outside by her lover in the middle of a winter night because he learnt that she cheated him and she froze to death. This explanation made so much sense to me and I felt  guilty inside of me that I didn't talk to this  poor soul that night.

My wife who doesn't believe in paranormal phenomenons at all, swore to never come back again to this hotel. On the other hand,  I still keep thinking about this young lady and sometimes I am tempted to come back to the Millcroft Inn and talk to her."