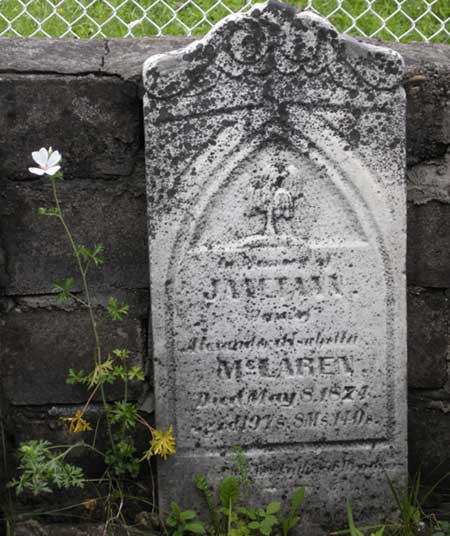 Below this, underneath the main writing, there is an inscription that I cannot decipher at all.

There are several versions of the "blue eyes" legend that we have come across over the years or have been sent into us. We have been able to confirm that the story in its various forms is well known on the base, and often when odd things happen the ghost of "blue eyes" is to blame by some of the personnel living, and working there. We were also able to confirm that this particular lonely, intact grave, deep within the base itself is where the haunting activity is said to stem from.

We will be looking further into the history of the area, and doing some genealogical research on Jamima, which may help to shed some light on the "blue eyes" legend.

"This story takes place on the Meaford Tank Range in Meaford, Ontario (between Collingwood and Owen Sound). On the north east tip of the peninsula there are many old stone ruins that the Army Reserve uses for training. There are old foundations everywhere as a community of farmers used to live there. There are many ghost stories that have come up from around the area and here is mine.

On my basic training course we were told about a ghost of a little girl on the east coast of the peninsula. The story is that the little girl had been out picking flowers, as she normally did before dinner, when her mother called. Her house and that area of the base is all forest and sits on top of a huge cliff edge that goes down into Georgian Bay. The little girls mom called and she came running, but what she didn't see was the old boarded up well that her parents always warned her about. She fell down into the well and was there for a good while. As she was 8 years old and could swim, it took along time for her to be over come with hypothermia and drown in the well. She screamed for help the whole time. A grave stone still sits outside between the house and the well. I have seen it.

To confirm the story though, I will tell you my encounter with the girl. Two years ago I was on a patrol with my section commander and three other guys. We were doing a reconnaissance patrol of a road over that way. It was mid August, about 0300hrs in the morning. We had reports from base command that new artillery gunners might have hit an old road that went through that part of the woods. Command wanted to know if we could still use the hilly forest road.

As we began our walk to our extraction point on the side of a road we could see something moving in the woods. There was a little white glow and we all could feel that we were being watched. We all wanted out of there. The air turned like ice and our hair stood on end.

Our stomachs dropped to our feet when we heard 'help me...please help me' from a little girl's voice far off in the distance. We all knew we heard it but our section commander said, "No, that is the way to the old well. Lots of troops have fallen into that well. Lucky none have died yet, but anyone who has went after the little girl has fallen into the well."

Soon we lost one of our troops on the patrol. We went back to find him headed right to the well. "I could hear a little girl moaning for help and I lost track of you guys after I stopped to listen, " he said. We grabbed him and left the area. When we got to the road the truck was waiting for us.

I have only been that way on the base a second time and on this fighting patrol at about the same time at night and a year and one month later I could see what I thought to be a little girl in an old Victorian style nightgown in the woods about 150m away. This time I saw her through IR night vision goggles. No voice accompanied the apparition, only her and the same creepy feeling. The air once again turned cold and the hair on my neck stood on end."

Update August 2010 one of our reader's writes:

"As a general rule for all of us CF personnel, we aren't allowed to enter grave sites within the training area, as respect for the dead.  A bit of an addition to the posted encounter:

In late 2007 I was posted to LFCA TC Meaford to do my DP1 infantry course. "Blue Eyes" seemed like a bit of a running joke among some of the staff, who in some cases would shrug you off if you asked about the tale.

In November, my course was doing its one week defensive exercise in the Hogs Back area (TA 5A on the linked map). I don't recall exact grids of our position, unfortunately.

The exercise was geared at defensive positions and sleep deprivation. By weeks end, people were seeing all sorts of odd things (batman running through the camp etc). However, myself and a few others do recall seeing (through our night vision goggles) a human figure walking through the field in front of us. When challenged about their identity, the figure disappeared and did not reappear. There were no "enemy force" active that night, and none of the staff were forward of our trenches.

The human figure was too far away to tell gender/height, but it was most definitely not wearing army gear. Just a white human shape walking around.

On a separate field exercise, my recce patrol walked through some ruins and came across an open well. A few of us noted that we had that "we're being watched" feeling, but again, no military personnel were active in that area asides from us.

I don't know if this will help any, but I figured it couldn't hurt to share."

We'd like to thank our readers for sharing these reports, and experiences with us. If you have any comments, questions or would like to share your own report, please e-mail Sue at This email address is being protected from spambots. You need JavaScript enabled to view it.

Update February 2012 one of our reader's writes:

"I agree with everything said there. I was an instructor at the training centre for many years (2007/2011) and that the area always gave me an uneasy feeling. It's always dead silent in that area and at night there is a big Willow tree near by in a ravin that always gave me the creeps. The area will make any hard infantryman instructor second guess the patrol location on any given night near "Blue Eyes" grave site. For some odd reason we were always there near or on Halloween as well. One night you could hear the coyotes howling and once the moon came out... Dead silence."

We were contacted in June 2012 by a current member of the Canadian Armed Forces who at one time was stationed at Meaford. This person is not necessairily a ghost enthusiast, but does enjoy taking photos of unusual and interesting things. One of the subjects of his photography at Meaford was this lonely grave. At the time he had not heard of the legend of "Blue Eyes" but the inscription on this grave that he photographed is more in keeping with the original version of the story that we first received. Could this be her grave?

“In memory of May Williams Died June 26, 1890 Age 7 yrs 1 Month 8 Days" "She has gone to heaven before us, But she turns and waves her hand, Pointing to the glories o'er us, In the fair and happy land”

The photographer further went on to state that according to the training map he received, there are several ruins of old farming/living houses, but there are only three marked cemeteries on the base.None we should add are openly accessible to members of the public, and we strongly suggest you do not attempt to trespass. This is an active Canadian military base, and these graves are located in live training areas.

Our thanks goes out to the photographer who contacted us and for granting us permission to reproduce his photos here. He has asked that we credit him to his pseudonym Bihnx. These photos remain in the copyright of the photographer and may not be used in any format without his permission.