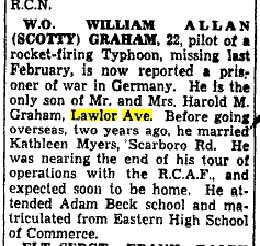 Toronto Star newspaper reports on a few Lawlor Ave people in its Pages from the Past archive.

Mr and Mrs Painter held a 25th Wedding Aniv. Party at 180 Lawlor and collected donations for the Fresh Air fund 1932

Ed Rowe fell from a window of his home fracturing his foot. Lives on Lawlor but no number given. 1934

17 year old Arthur Odell was robbed while delivering a prescription order. He lives at 156 Lawlor 1935

Albert Glibbery of Lawlor (no number) burned his hand 1935

William Brooke of Lawlor (no #) injured his elbow at work 1935

Bob Reid, age 11 of 9 Lawlor was awakened by explosion in a shop on Kingston Road 1936