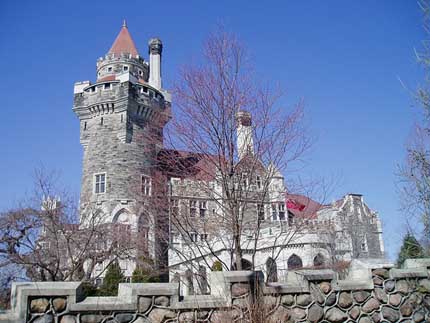 The most famous castle in North America stands as either a beautiful landmark at the north end of Spadina Avenue, or in some peoples' opinion, a huge eyesore at the south end of Spadina Road.

Either way, Sir Henry Pellat's castle is as grand as any Europe has to offer, and is a tremendous tourist draw. I have always thought that the "Castle on the Hill" was one of the more inspirational sites in Toronto, and I guess that is backed up by the number of weddings and events held there, but is it haunted? Apparently not.

Sir Henry and his wife never truly lived in the castle, as the Pellats went bankrupt during the building of the place. Still, when I was a kid growing up not far from this imposing edifice, rumour had it that the elevators had "minds of their own" and that Sir Henry had been seen in his indoor gardens and at his desk. There were also reports that when the building lay unoccupied, it was the scene of ritualistic rapes and murders. All of these claims seem unfounded, even though the one area left unmended by the Kiwanis Club (which took the place over in order to refurbish it and run it as a tourist attraction) does have a distinctly "creepy" feeling, as do the long underground tunnels leading from the castle to the garages.

We don't list our 'criteria' for a reportable story (to avoid possible hoaxers sending in bogus stories) but we can say that all the Casa Loma ghost reports to date have been unsubstantiated using our guidelines thus far.

Sadly, it seems that our city's castle, to quote John Colombo, "lacks a ghost to call it's own."

Granted, one thing we've learned over the past years is that one should never say never and if there's enough reports and they do meet our standards, we will put it up post haste!

A Story of Old Toronto by Austin Seton Thomson