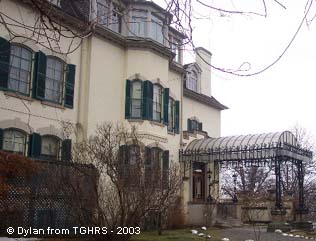 Often overlooked because of it's ostentatious next door neighbour Casa Loma, Spadina House ( pronounced Spa-DEEN-a) is truly one of the nicest, prettiest and best maintained museum/houses in the Metro-Toronto area. It is without a doubt one of our favourites.
The house as it stands, is actually the third home on the same foundations. The first home was built by Dr. William Warren Baldwin in 1818 as a country home (York - Toronto had not sprawled that far North yet) and was a two storey family dwelling typical of well off society members in Upper Canada. This home unfortunately burned to the ground in the mid-1830's (luckily, with no reported loss of life) and Dr. Baldwin built a more modest one story dwelling on this lush piece of real estate.

Baldwin's grandson sold the property through public auction (to look after some bad debts) and the property came into the hands of James Austin, a wealthy grocer and investor, who also saw the home and land as an ideal setting for his own 'castle' in very rural Toronto in 1866.

Austin built a grand home in the area that was starting to become "Millionaires Row" on top of the foundations of the original Baldwin houses. (He demolished the second, single story home to see his mansion go up.) Neighbours included the Eaton's family "Ardwold" estate (demolished), the Arthur's "Ravenswood" mansion (again demolished) and the Nordheimer's "Glenedyth" (also, sadly, demolished) which amounted to the crown jewels in this tremendous neighbourhood of the wealthy.

Over the years, additions were added to the house and changes made to accommodate a growing family and to improve it's vistas... not the least of which was the ruining of their Westward looking porch's view by the building of the imposing Casa Loma.

Under the Austin's, the house seems to have been a happy place filled with family and friends and on occasion, up to nine children living within it's walls. There is no reports of any terrible "untimely" or tragic events here, which occasionally do trigger some ghostly legends. In fact, the Austin's even weathered The Great Depression with much more cushioning then most of the other families that had moved in around them.

Anna Kathleen Austin Thompson the last living resident of the house who lived there until the 1980's, moved in to a smaller dwelling behind her old home while it was being converted into a museum, and according to staff enjoyed poking her head in now and again to find out what the archeologists had discovered about her family. 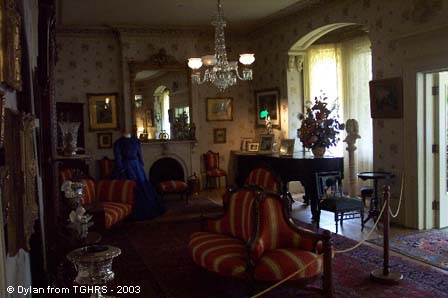 From what we have read and heard, overall, it was a very happy family residence...

The sixty-four thousand dollar question that we get asked all of the time is... "Is it haunted?"

Although we had heard tales that the house might have been haunted, Toronto GHRS Researchers Steve, Dylan, Sue and myself (followed by another visit to speak to a particular staff member) were delighted to find out that this wonderful museum does indeed seem to have a benign haunting.

On the first trip (Steve, Dylan, Sue and myself) we were following up on a lead from one of our readers about seeing "something" up on the third floor. While discussing this with one of the staff, we were suggested to contact another person involved with the home who gave us their own version.

While in the house at night for a special occasion, the staff member 'clearly' saw what they described as a ghost... It was a 'fuzzy' apparition about three-and-a-half to four feet tall and in the shape of what seemed to be a half-egg (point side up). The apparition darted from one of the children's bedrooms on the second floor across the hall to the staff bedrooms.

When the staff member reported this to another person in the house with them, their sighting was not truly confirmed but the "grey mass" was. The other person had seen it twice in the third floor hallway (shown below). 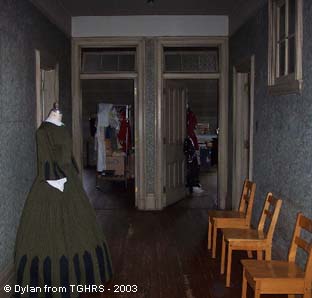 Editors Note: Tours and the general public are not usually allowed on the third floor of Spadina House except on special occasions and during the annual Toronto "Doors Open" days. One such special occasion happened in October of 2003... more on that below!


What's interesting is what some of the staff put this "spirit" down to...

In the basement of the house is an archeological exhibit with artifacts and information from the house and it's occupants. One of these showcase exhibits is an ancient wolf... hunted and killed many, many years ago and then looked after by a taxidermist. The wolf was more-or-less recently away from the house to be restored and was brought back and displayed in this basement museum... which is when these sightings took place... after the wolf was brought "home".

This could be a coincidence... or not.

The other reports, although not at all backed up, consist of a more "human" element behind them, but this latest sighting with two witnesses is indeed intriguing.

Regardless, the house is truly magnificent and well worth visiting for any history buff... or just anyone who appreciates a beautiful and happy home to visit with exquisite furniture.

Happily, we (the GHRS) will not only be back to do further study (and to enjoy the atmosphere and very friendly staff) but we will be holding our October 2003 event in this building! (...on the eighteenth.)

I hope that this Summer, I will be adding plenty of data to this site as, again, it's "spirits", if they do exist, seem very happy and friendly indeed... even if they may be originating from their dusty exhibit in the basement!

In late 2003 I was given permission by staff members to conduct an investigation of Spadina House after hours in the evening. The staff kindly gave me unfettered access to the main, and second floors. Recording devices were set up in areas where apparitions were reported, as well as numerous photos taken. I spent the better part of an hour alone within the museum, which I can tell you to date is one of the highlights of my being a ghost researcher despite not being able to uncover any evidence of ghost, and haunting phenomena.

The recording devices did not pick up anything unusual nor did the photographs, but I did have the most peaceful, and tranquil feeling come over me while I was there. It is as if this house is still alive with it's memories of past times. This could very well be because most everything at Spadina (unlike most other museums) is unique to the Austin family, and has belonged there throughout this home's years.

As Matthew has stated above the museum was a happy family home in it's hey dey, and the reports that staff have provided us with over the years (some private, and unpublished) are quite benign in nature.

Your privacy, anonymity and security will, of course, be maintained.

Reference on History:
Thanks to the tour guides, volunteers and Interpreters on the site as well as the kind and knowledgeable staff of Ontario Heritage and The City of Toronto Dept. of Culture: Museums and Historic Sites.

Please Note: Our site is not related to, or working officially with Spadina House. We're simply reporting the "ghostly" aspect of the site and telling anything about it's story, reports, and information that we can. If you'd like to visit the house or have any questions about hours, fees, volunteering, or the like, please visit the City of Toronto's Arts, Heritage & Culture Website which is run by the site's management, the City of Toronto.

In 2009 one of our readers wrote in with the following:

I'm an electrical technician and I work for a company that does contract work for the City of Toronto. We do annual inspections of most of the historic sites. In a recent visit to the Spadina House I was in the living quarters of the coach house working. I was in the hallway just outside of the kitchen when my hair was gently pulled on the back of my head. When I turned around there was nobody there. In another instance while I was in the coach House dwelling, I was walking up the stairs when I heard someone in the kitchen that sounded like the stirring of a cup of coffee. When I went in the kitchen the stirring stopped and there was nobody there. I have worked there several times and despite my experiences, I always felt comfortable and welcome there.


Our thanks to our reader for sharing this with us. If you believe that you have also had an experience at Spadina House please do consider sharing it with us.

Write to This email address is being protected from spambots. You need JavaScript enabled to view it. and of course, your anonymity and privacy are assured.