In Colombo's book, Haunted Toronto, it is reported that journalist Tracey Tyler said that the ghost remains this way because she feels "trapped in time".

The following report is retold based on information gained from an interview taken by This email address is being protected from spambots. You need JavaScript enabled to view it. - PSICAN Investigator

While working in Toronto's infamous 'house of detention' a Corrections Officer experienced what could only be considered an unexplainable event.

For those not acquainted with the interior of the Don Jail (actually the newer section which was constructed in the late 1950s was originally named the 'Toronto Jail' even though it is physically attached to the older 1863 building) the detention areas are set up in the following manner. There are many units which are identical to the following layout. There are two rows of approximately 10 cells back to back with each row facing out into a barred 'day area' where inmates are allowed to take limited exercise. Resembling a box within a box, the cells are barred and the day area is also barred. The corrections officer sits in a control booth just outside that area where they can observe the inmates as well as lock and unlock the two doors which are the only way in and out. Like an air lock on a submarine, these doors cannot be opened at the same time. The outer door is opened and then secured before the inner door is opened and access to the day area is allowed. There is also an area where the guards circle the prisoners' area allowing them to safely view both the day area and the cells where the inmates are locked in at night. These 'rounds' take place every 20 minutes for the dual purpose of verifying the prisoners' presence as well as their well-being. In the middle of the day area and securely chained to the ceiling is a large, heavy punching bag. The chain makes an unmistakably loud rattling sound when the bag is being pummeled.

It was approximately 2:00 in the morning when, during one of the required rounds, an inmate called out to the guard that he had been awakened by someone "hitting the bag". Even though the light in the area is dimmed during the night hours it remains bright enough for the guard to see clearly into the cells. When the prisoner made his nocturnal complaint the guard had a clear view of the prisoner and the punching bag. The guard had not heard the obvious and familiar sound of the bag being used quickly walked back to the beginning of the circle and began head count. If the bag had been hit it meant that an inmate was able to get out of their supposedly locked cell and into the day area As everyone was accounted for, the inmate was told to go back to sleep.

Twenty minutes later during the next set of rounds the inmate complained again. The guard looked directly at the silent, stationary punching bag and then repeated the strong suggestion that the inmate should go back to sleep. The guard then went on break after warning the relief officer of the recent events.

The guard was surprised to be called back early from break by the relief officer who reported that two inmates were now complaining of being awakened by someone hitting the bag in the enclosed area. The relief officer had decided a check of the cell doors inside the day area was required. This procedure meant the two double security doors to the day area be unlocked from the control booth by a second guard. The check was quickly made and all the cell doors were found to be secure with all inmates present and accounted for. This should have been the end of it except that one of the next sets of rounds, this time with two other officers present, the heavy, previously stationary punching bag was swinging back and forth. There was no sound from the chain and there was no possible way an inmate, even with a long broom handle, could have stretched out through the cell bars and even reached the bag let alone pushed it hard enough to make it swing at the rate it was observed.

"I attended a tour of the Don Jail in Toronto in relation to the future redevelopment of the site. While standing in one particular area outside a row of cells in the east wing, the air began to feel heavy and I experienced a chill, a tingling sensation on my skin and an overwhelming sense of sadness. At the same time, a flash of an image appeared in my mind of a man with dark hair sitting in the cell I was looking toward - he was sitting on the floor and bent over. This was only a very quick flash and quickly disappeared. I felt very emotional at this time and left to join the others in the group. Nothing occurred anywhere else in the building and I continued to enjoy exploring the building. I returned to the area in the east wing with a few other people and decided to go back to that spot to see if anything would happen. Again, an strong sadness came over me as well as a tingling sensation, etc. I do not consider myself an openly emotional person, yet I felt such a strong sense of despair. It's difficult to describe, but the feelings I experienced did not feel like my own, in other words, this feeling of sadness was not my own but was being "thrust" upon me.

I don't really know - I expect that a place like the Don Jail would have had a very intense atmosphere. Perhaps I picked up some left-over energy...? It is not like me to display my emotions - especially in a work situation. I am rather analytical and this episode really surprised me."

Our thanks to the experiencer for the above report. The witness has also added, and we have confirmed the following:

"Five bodies were found in the parking lot behind the Don Jail last week. There are accounts of approx. 11 burials so archaeologists will be undertaking further excavations. I was at the jail the day after the graves were covered up.

I don't know if the discovery of the graves stirred things up but I tend to agree that such an emotionally-charged building such as the Don Jail would somehow contain some of that energy.

I have never had such a strong "emotional" feeling come over me as happened at the jail, however, I have had several other experiences in the past in places such as the 3rd floor of Spadina House ("feelings" of something horrible) and the Assembly Hall on the former Lakeshore Psychiatric grounds (lots of noises), as well as a few other experiences in not-so-famous buildings.

In case you are wondering, my job gives me some access to heritage buildings around the city so that is how I am able to enter these buildings."

One of our readers writes:

Very much like the individual who experienced a "heaviness" and "feeling of sadness",  I too have had the same sensation in the exact same location being referred to during an opportunity to explore the interior of the old Don Jail just last Friday . The "dig" is just wrapping up this week and a total of 15 human remains have been removed and interred at St. James Cemetery. I don't believe the dig is responsible for the "stirring of ghosts/spirits" because I had the same experience back in the 80's during another opportunity to enter the jail.

Our thanks and great appreciation goes out to this witness for sharing their feelings on this location along with several photos of the interior. Please see next page for interior photos taken by an employee.

Do you have anything to add? Please contact us at This email address is being protected from spambots. You need JavaScript enabled to view it. 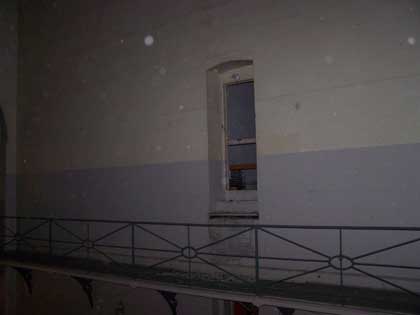 Inside the Old Don Jail In Toronto. Catwalk Please note that we do not endorse the idea that "orbs" represent the spirits of the dead. The old jail would certainly contain a lot of dust, and this photo is posted simply for interest only. 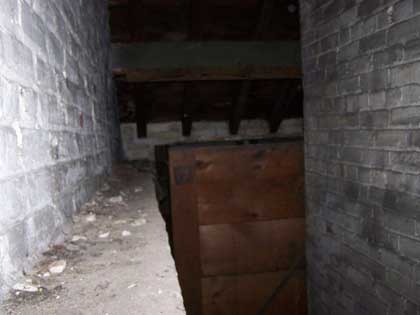 Inside the Old Don Jail In Toronto. Alcove in the ceiling 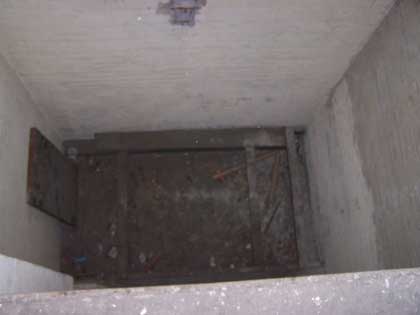 Inside the Old Don Jail In Toronto. As seen at the top of the page for this report this is a view of the bottom of the old gallows. 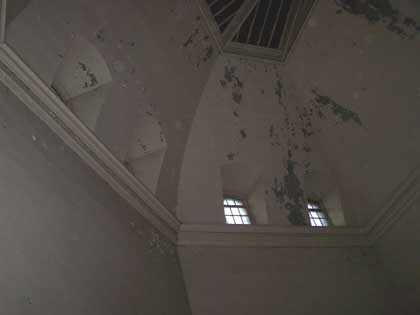 Inside the Old Don Jail In Toronto. Rotunda ceiling. 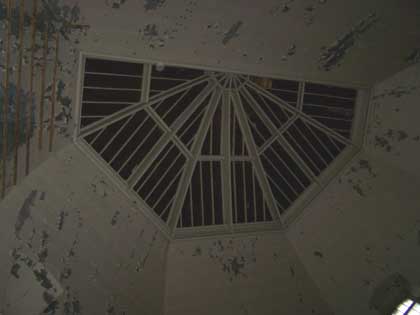 Inside the Old Don Jail In Toronto. Rotunda ceiling another view. 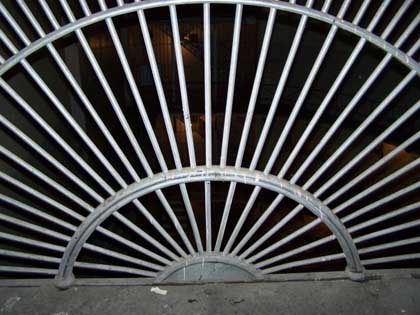 Our thanks to the photographer, and employee for sharing these interior shots of the Old Don Jail with us, and our readers.