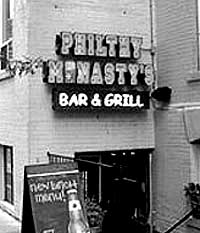 One of our readers writes in:

"I was working at the Philthy McNastys located at King and Duncan, I was in the office doing end of the night paperwork, when I heard a loud bang, at this time only one bartender and myself were left in the building. I came out of the office and the Bartender and myself went a did a check of the restaurant. We found no one else in the building and all doors were locked and secure. We returned to the office with a errie feeling, about twenty minutes later we heard a huge bang and it was coming from the kitchen. As we were heading back there we saw a dark figure run past the bar and into the kitchen . We had just checked the kitchen and had found it deserted, we grabbed something for protection and went back to investigate . Upon checking the kitchen we soon realized that their was no one around, feeling scared and nervous I decided that we would lock up and complete everything in the morning . We headed back to the office and were attempting to lock up when someone knocked hard on the office door, we called the police who came and searched the building all told us that the building was locked tight and that they had not found any signs of trespass. These sightings were frequent and a lot of the staff and managers witnessed incidents. We had several staff complain about feeling something watching them as they did their closing duties ."

Our thanks to our reader for sharing their experiences at this location.