Is it haunted? Is it not? Is it a case of so many people heading to a location to see a 'ghost' that they have created one like a "tulpa" or is it a case of hoaxers and jokers creating a ghost to scare friends? 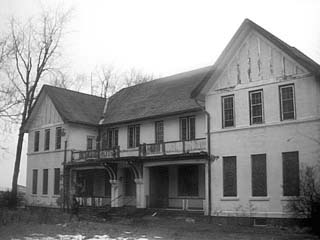 The old (and somewhat) abandoned Whitby Psychiatric facility, like the one in Mimico in Etobicoke, is a series of older buildings that are slowly being reclaimed due to being abandoned. The site is private and is not open to the public, although this has not stopped many thrill seekers and others including a 'film' shoot for a music video aired on most "music television" programs and channels.

Built in 1919 (just after the First World War), like the other hospitals of the day, it was built to allow the patients to move and live without hindrance with a network of tunnels connecting the buildings. Over time, the structures (like most) became old and unstable and, due to the year it was constructed, had an asbestos problem (asbestos added to the walls as a fire retardant during construction... before the days of knowing that asbestos flakes, powders, and then becomes a fine dust that is highly carcinogenic). The facility was shut down and the new, modern building on the lakeshore nearby was opened in the late 1990's. Of course, abandoned hospitals, especially psychiatric ones, always garner more attention by would-be ghost hunters then most other sites. Stories of patient abuse and other horrors soon leak out and seem to bolster the idea that the site must be haunted.

When it comes to "patient abuses", I would caution the reader that many of what was then considered adequate and proper treatments to help patients are now considered "questionable", but very few times were the treatments considered (by the staff) to be "sadistic". The staff and doctors were, indeed. for the vast majority's purposes trying to help... and often did. In fact, when doing research for this piece, I found that overall, patients, nurses, general workers and doctors from the site when it was operating had very little negative to say about the site. In fact, most were happy and felt that the work, care and "accommodations" were excellent.

There is a well documented case of a patient killing a guard once, but this seems to be an isolated incident.

Regardless, the site soon became a popular "hang-out" and drinking spot for teenagers and the windows (that exist) are usually smashed, graffiti adorns the walls in almost all places, fires have been started and general damage has been done.

Through all of this, there are so many "reports" of things going on that, to be honest, a good researcher has to more or less discount and ignore them all.

I know this sounds odd, but it is indeed the case.

The problem is, it's impossible to tell where the "real" information starts and the playful hoaxing begins. For every one person that feels they've experienced "something", there's five people that haven't and one person who admits to hoaxing things. An intrinsic problem when dealing with a site like this. It is impossible to sort the "wheat" from the "chaff" due to the constant abuse and silliness of those that make this site a spot to gather, damage, and generally "goof around" in.

Is this site haunted? Many say yes, some have tried to bring evidence to bear, and maybe it is. Just as many say no, have admitted to doing "things" to hoax others and cause a general issue for would-be investigators. It is a "drinking spot" for some and many of those folks have attempted to "create" a mythos about the site to lure friends and other's to it for a cheap thrill or laugh... Could they be "masking" or causing issues that have suppressed a possible "real" ghost? It's possible. Have people captured evidence of this? Again, it's possible, but since creating a controlled environment for data collection is impossible (being able to eliminate completely all possible "natural" or human cause for the anomalies), one has to take all evidence with a big grain of salt.

One thing that is clear, the site is in a bad state of decay and the walls of all the buildings contain asbestos. There is no trespassing on the site and it is not open to the public. The site is patrolled by both security guards and the police. When we spoke to people at the new facility, they made it very clear that permission to go into the site is not available and that the future of the site, because of health concerns, structural issues, and the rampant vandalism is in deep question... which is sad, as the architecture and the work done here is important.

Still, even now, people break into the site and cause issues... meaning that chances are the site will eventually be destroyed either by fire or by the wrecking ball... then it's a given, as for ghosts, we will never know if there are good, solid reports from the site.

As for ghosts, history and folklore, this is a case of thrill seekers and vandals ruining not only a "good haunt", but an important historical site that should be maintained as a reminder of our heritage.

Sadly, a site that may have an interesting story obscured by the stupidity of thrill seekers and vandals.

Still, we are very interested in reports from other sites in the Whitby area. If you do have a report, please contact us This email address is being protected from spambots. You need JavaScript enabled to view it.