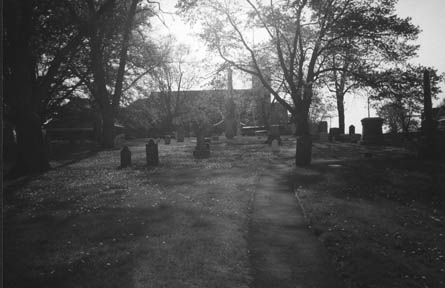 This battlefield/cemetery was once Ontario's number one tourist destination because of it's proximity to Niagara Falls and the fact that American, British and Canadian tourists viewed the battle as a victory for their side. Stories circulate about the grizzled and cunning veterans of the battle who settled near the site and took visitors on guided tours and how they would first find out the origins of their "tourites" and then alter the story so they would see the "stars and stripes wave in triumph" or "the Cross of St. George float in glory".*

American tourism dropped after the American Civil War (1861 - 1865) as the Yankee's now had more local battlefields to visit. By World War I, even Canadian's had stopped making the site a real "tourist" area.

At 7:15pm on July 25, 1814, General Winfield Scott advanced on the high ground towards the cemetery up the hill on this quiet pastoral road. On the hill beside the few headstones was British artillery which commanded the surrounding areas of Niagara Falls. The British, under the command of Lieutenant General Gordon Drummond (a Canadian by birth,) fought a hard battle where command of the hill see-sawed when the Americans successfully took the guns and then the British won them back not too long after.

Hours of heated battled took place around the hill where (after the thick clouds of gun powder smoke built up and the inky blackness of night all but made 'vision' an impossibility,) only the occasional flash of the opposing muskets would betray the distance and location of the oppsing lines. It was not uncommon during this night battle that friend fought pitched battle with friend and enemies slipped through lines without raising an eyebrow, their presence masked from their opposite number by the darkness of the night and the clouds of thick, acrid smelling smoke from the gun powder used in cannon and musket. Many British, American, Canadian and First Nation's warriors lay dead. Some with their bayonets touching each other at the point... they were standing in the firing lines so close.

By 1am, the Americans had withdrawn to Fort Erie and the camps at Chippawa. Although the British had control of the hill and Lundy's Lane, the American's declared the action a victory having captured and carried off a British 6lbs canon and having achieved one of their objectives with the burning of a nearby town, Bridgewater Mills. Having successfully defended the hill, regaining the artillery position and (oddly enough) capturing two American 6lbs canons (yup, it kind of even the score and then some), the victory seemed to rest with Gordon Drummond but regardless, over 1,700 men littered the ground or were slowly dying under the saws of 19th century surgeons.

This action with it's strange "double victory" was the bloodiest single battle during the conflict in Canada** but it also led to Canada's bloodiest battlefield during the siege of Fort Erie where Drummond tried without success to dislodge the Americans from Upper Canada with a bloody and brutal month-long siege. That site also has it's share of ghosts.

Now, the cemetery, now known as Drummond Hill Cemetery, is on the busy thoroughfare of Lundy's Lane running through the City of Niagara Falls.

Apparently, on some nights, the spectre of five ghostly red-coated soldiers have been seen moving up towards the hill and past the homes on Lundy's Lane.

Adding to these reports is the fact that although a memorial had been established in 1895 in the cemetery, the City of Niagara Falls continues to build and grow over this battlefield and apparently, grisly relics are still turned up occasionally in the fields near the site. Many men were buried where they fell. Many more were cremated in funeral pires and their ashes and bones were buried in pits nearby.

Although the battle story speaks for itself and the ghostly sightings make a lot of sense, we have an ideal place for those with several interests. Aside from our ghostly trio, the site also offers to ghost enthusiasts the chance to take photographs not only on an old battlefield but in a cemetery as well. We at GHRS are constantly asked where people wishing to try "orb photos" in cemeteries should go and much as we don't put much faith or stock in such outings (and less in "orbs"), if there was a place in Ontario that MIGHT produce some kind of phenomena that could be captured on tape or on film, this would definitely be the place we would recommend to go and check out. If you do decide to make the trip, PLEASE be respectful of this historic site and of the people who live around it. Also look for the graves of Laura Secord and the first child of European descent born in Niagara.