Although it sounds as if it SHOULD be closer to the GTA, Fort Mississauga is a hidden gem within Niagara-on-the-Lake.

The fort was built from stones taken from a lighthouse that was located nearby to bolster British defences at the mouth of the Niagara River at Lake Ontario.

The fort, unlike many others in Ontario, has NOT been restored and is not really "open" to the public. The large, stone rectangular blockhouse is sealed up and although you are welcome to tour the grounds, they are located in the golf course at the northern edge of town and warnings abound about flying golf balls.

Steve from Orb And Ghost Photo Research, Sue from Para-Researchers of Ontario and myself toured the "ruins" early in the evening on a chilly December night. Although it was cold making things a little uncomfortable, the cold air did alleviate the worry of a sliced ball nailing one of us in the noggin.

The fort is being slowly reclaimed by the Earth but aside from a large rectangular (but closed,) blockhouse, mini-tunnels that you CAN enter lead to two powder magazines within the earthworks and another mini-tunnel to the lake as a sally port.

Like most "very open public haunts" (this one with the advantage of two semi-cavelike magazines,) the place is an obvious drinking spot for local kids as we noted more than a few "empties" around as well as some graffiti.

The fort is home to a couple of ghost stories we've heard but both have more the line of legend than of historical fact. The most improbable is the headless native warrior. Ashley, the white witch of Niagara told us the story of an unfortunate aboriginal who's head was literally shot-off with a cannon strike from Fort Niagara on the American side. This sad man now wanders the fort sans head. The problem with this tale is the fort was built in 1814 after the British had control of Fort Niagara and Fort George. It is unlikely that a British gunner would fire at his own fort.

The next story was sent to us by a native of St. Catharines who told us that he and several "buddies" had seen the apparition of a "whipped" soldier on the earthworks surrounding the fort. Although a flogged soldier is not out of the question, I did ask how they could tell he was flogged but received no response.

There are at least three good reasons people should visit this spot...

First of all, this is a FREE spot to visit! There is no charge to visit the grounds and look around for yourself.

Secondly, we'd love to know your impressions of the place. If you do visit and wish to tell us about it, please e-mail us at This email address is being protected from spambots. You need JavaScript enabled to view it.

Lastly, this place had more "spooky atmosphere" than many of the haunts we've visited and all three (original) intrepid if chilled researchers commented on this fact.

Plaques and signs located at the fort tell it's interesting history including information about Native and English dealings in the area. 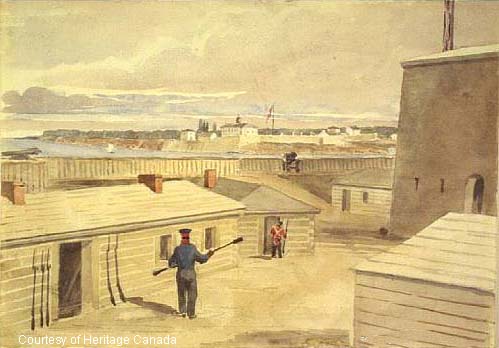 If you do visit and we do recommend it, BE SAFE, BE RESPECTFUL and HAVE FUN! It's a "charged" atmosphere for sure!


Apparently, there is a legend that says there is a particular spot on the golf course surrounding Fort Mississauga that if you find and stand on, you will actually here the battle of Newark (Niagara-on-the-Lake)/Fort George being raged around you by invisible armies. Apparently, a few people have done this and said it indeed is true. It does sound like a bit of a legend and if someone was brave enough (and had enough time to hunt for the spot) they should try to do it carefully with respect for the course and the land... not to mention the flying golfballs and golfers that won't be thrilled to see people standing about listening for a ghostly battle to occur while they attempt to line up a shot!

Do you have a report from Fort Mississauga? Perhaps another area of NOTL? Please contact us at This email address is being protected from spambots. You need JavaScript enabled to view it.