PLEASE NOTE: This is a site devoted to cataloguing ghost stories from across Ontario and is not related to or run by the Angel Inn itself. If you wish information about this wonderful spa/inn, please surf to Niagara On The Net for more information.

The Olde Angel Inn located at 224 Regent St. Niagara on the Lake is one of the few businesses of today that proudly boasts of its resident ghost. The plaques found just outside the front door of one of Ontario's oldest inns tell the story of one Captain Colin Swayze.

The story goes that the Captain was killed in the basement by American soldiers searching the property. The townspeople told that the Captain delayed joining the retreat to rendezvous with his sweetheart at the Inn. The soldiers who had survived told a different story. It was common knowledge that a store of Navy rum was kept at the inn, and that the good Captain was denying the Americans any victory party with the British Rum. You the reader may pick which one to believe. This all being told it is said that even today Captain Swayze's ghost can be heard walking the Inn late at night, and as long as the British flag is flown over the Inn ( as it does today) the ghosts will remain harmless. 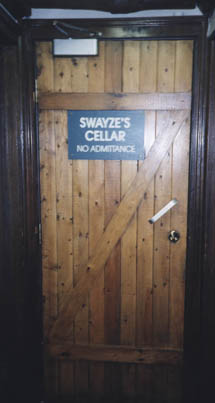 The Olde Angel Inn still operates as it did back during the war of 1812. The pub which boasts a large list of local wines, as well as a full dining room offering the weary traveler a delicious meal. This unique Inn offers many delights for all that stop by. The current owners offer a certificate to any persons spending a night in their haunted Inn, to show off if you have the nerve to share your evening with the ghostly footsteps of one Captain Swayze.

We received the following report from one of our readers...


My husband and I went to Niagara on the Lake for our honeymoon in 2002. We spent a good deal of time researching the "haunted history" of the area as it seemed amusing and it added a bit of a thrill to our stay. Our first night there, we stayed in the Olde Angel Inn and we were well aware of the stories.

Not wanting to fall prey to some trickster trying to cash in on a story, we took a look around the room checking the alarm clock etc. Everything seemed normal. Our evening was uneventful; we toured the city, went to the Fort George candle light tour and returned to the hotel. There is supposed to be a presence in the downstairs washroom area, so we made a point of visiting the washrooms. My husband didn’t notice anything of consequence, but in the ladies room, I distinctly saw a shadow move while I was washing my hands. I know I was alone.

Back in our room, we fell asleep around 12:00. At 1:00 we both awoke to some noise downstairs in the pub. I didn’t know what time it was and my husband, trying to scare me, told me it was 4:00am. We both knew the pub closed and they did their clean up just after 1:00. Of course after he confessed to the real time, it was obvious that the noises were just staff closing up for the night and we both fell back asleep. The irony of this story is that at 4:00 am, we were both awoken again, by an awful lot of noise downstairs. It sounded like tables being moved and thumped around. Things even hit the ceiling directly below us. These noises went on for a good half an hour, thumping and bumping. It slowly died down in the way a thunderstorm dies down; the odd bump and thump continuing on after the main ruckus had stopped. Let me tell you how scary that was!

In the morning, we made a point of asking what had happened there overnight. The morning staff told us that after closing up at 1:00, no one is in the pub until morning. I asked specifically about the previous night and they insisted no one was there. Now, I am a natural skeptic and would be unable to completely believe in ghosts until one comes to visit me and talk to me directly, or I would have to see things move on their own and be able to examine the items to ensure there were no pranks being played. So I can not be 100% sure of ghostly furniture moving in this Inn, but the events in this Inn were unusual, and the staff were so adamant about no one being in the pub after close, that I think this may be as close as I have ever been to a haunting in my life.

"Dec/ Jan 2000 I was pregnant with my first son.we go to olde Angel Inn  I have been going there since age 10, Love the steak and kidney pie, was craving it. We lived in Ajax, drove to Niagara Lake for pie! This day I had to go to the bathroom, I was so nervous about the stairs and falling. I made it to bathroom, washed hands. I was stood in hallway scared to climb up the stairs, they were steep. I looked down at my tummy and when I looked up a man was stood on third step up, tipped his hat and motioned me to go upstairs. I said, I won't fit. He did the motion again. I surprisingly fit beside him when I turned around to say thanks no one was there. May 2002, went to bathroom with my son. Man appeared tipped his hat, son said he had no feet. Told him don't be rude. Looked back he was gone. I had hives on my legs itchy when we got  to top stair.


There is a legend at olde angel inn, have tried to find pictures. I emailed ole angel inn and they emailed me back saying nice story! Seriously, I have struggled a long time to tell anyone this, and to get shot down like that confirms they think perhaps I am full of hogwash. It wasn't until someone said to me,"people don't tip their hat to a lady these days." Where I kept thinking about that, and something I have never forgotten.  Funny the man's face was so gray and his clothing was nothing I have seen before.I have had a few experiences that I can't explain or creeps me out."

"My husband and I stayed at the Olde Angel Inn this past weekend and had an unusual experience that neither of us can come with a logical explanation.  Neither of us believe in ghosts, but we don't know how to explain what happened. We've stayed before in the Captain's Room and heard shifting of furniture in the morning (they have bands at night that they move out tables and chairs) and banging from the kegs of beer coming in early in the morning.  Noises all can be explained.  The floors creak as any old wooden floors would.  I haven't had a cold feeling or seen anything unusual.We stayed in the Governor's Suite for two nights this time.  The first night, we didn't notice anything unusual. The second night, we went to bed after watching the band downstairs.  They were on their last set when we went to sleep.  The noise didn't bother us.

The Governor's Suite is two rooms.  We slept in the far room with the door closed to the first room to make it cooler.  The first room was warm with the heater.  In the middle of night, not sure what time, both my husband and I were woken by a knocking.  At first, I didn't know where it was coming from whether it was the wall at our heads, the floor under the bed but in the end, we both agree that it seemed from the bottom of the headboard or the bottom of the wall on our bed.  It sounded like wood being hit.  It was a consistent beat.  If I believed in ghosts, I would say it was like the beat of a drum.  I'd like to say it was the neighbour's headboard banging the wall but it was very consistent for a long period of time.  Too consistent for such a thing.  I cannot come up with a reasonable explanation.  It continued for about 20 -30 minutes or so.

At first, my husband got up and went to the bathroom.  He didn't see anything.  I couldn't see anything but the knocking continued during our search. After we were in bed trying to ignore the banging, we both heard the floors creaking in the other room as if it were footsteps of multiple people that sounded like they were walking across the floor.  They too lasted for the duration of rest of the time of the banging.  Then finally both the footsteps and banging stopped  We didn't see or hear anything more.We talked about it and we both had the same experience, heard the same things, we both felt that we were awake and neither of us actually saw or felt anything, only heard things. As I said, neither of us believe in ghosts but at the same time, neither of us can explain this experience."

Our thanks and appreciation go out to the witnesses for sharing their experiences with us. Have you had a similar experience, can you add further information to this report? If so please contact us at This email address is being protected from spambots. You need JavaScript enabled to view it. Your privacy will be protected and confidentiality is assured.