This was sent in by one of our readers...

In Burlington, Ontario there's the historic home of Joseph Brant, I'm still in high school and I have heard many kids talk about an old lady on the second floor who has been seen in the museum by visitors, they say she appears to be sad about something.

One such story was that on a Halloween night a man who was driving down the street past by the museum saw a light in one of the second floor windows. He said the light was faint as if of a candle. The man was even more surprised since his daughter worked in the museum and he knew that the museum was supposed to be closed at that time of the night.

There are also reports of things being found out of place when they come to open the museum in the morning.

I have been looking into this occurrences but from what I have found the original house burned down (I haven't found out from what,) and the new museum/house was rebuilt in the 1930's in the same spot.

This e-mail sent us out to do a little more on-site investigation of the Joseph Brant Museum. In May of 2000, Frank Correia, Tamara Zyganiuk, and Jennifer Krutilla and Matthew Didier of the Toronto Ghosts and Hauntings Research Society visited the site to get more information about the building and the hauntings itself.

We contacted Sharon Stevens of the museum and arranged a quick visit. Sadly, Sharon was unable to be there but did provide us with quite a bit of information on the site and on it's ghost(s) as well.

The original structure was built in 1800 for the Mohawk chief, Joseph Brant (Thayendanegea) but was demolished after years of neglect in 1927. The building that houses the museum actually dates from 1937/38 and was built as a tribute to Brant by the I.O.D.E. The museum officially opened in 1942. It apparently was moved some time after that from it's original foundation to it's present location to allow for the nearby Joseph Brant Hospital to expand it's parking lot. 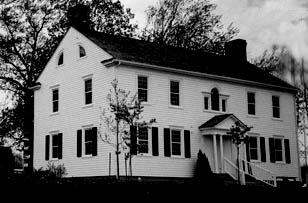 The primary suspect of one of the ghosts (named "Elisa" by a witness who had a "silent" conversation with the apparition who made sure that it was spelled with and "s" rather than a "z",) was probably a lady of comfort that ministered to the soldiers housed at the hospital during or after World War One. A lady in white or grey has been reported seen in a Victorian dress on the second floor of the museum. She was described in one account as "a heavy set woman and not the least attractive".*

Most of the reports we have read simply tell of a presence or feeling that Elisa is near although there do seem to be a lion's share of sightings of the apparition. There is one person, a volunteer and a ghost enthusiast named Ann Urquhart who did some investigating of her own by leaving tape recorders playing overnight while the building was "empty". She heard the rustling of fabric, papers being shuffled and the sound of a cupboard door closing. Ms. Urquhart also believes that there is a second, male ghost on the ground floor of the museum.**

Sharon set us straight about the story submitted by our high school reader above when she wrote to us...

Good story, just not true. (My father) just looked up at the museum because He noticed the lights were on at 8:00 p.m. on a Saturday and thought it was strange. He also saw a 'woman' in the window which I later found out was another staff member. No ghost!


In all fairness, after reading one particular article in a local Burlington paper, I misread it and almost repeated the same mistake as our student submitter even though Sharon herself had set me straight before our visit! Hmmm, how many other "ghost stories" get started because of this kind of broken telephone communication! Thank goodness for Sharon saving me from a terrible faux pas!

The museum itself is an absolute treasure trove for those interested in the history of Upper Canada and Joseph Brant. If you're venturing to Niagara, Hamilton or Burlington, it is definitely worth a visit. Please ask about their clothing exhibits which are absolutely incredible. As a note to "ghost enthusiasts", most of the staff we spoke to were very willing to discuss Elisa so if you want more information and a great day-trip, please visit the site. It's just off the QEW on Maple Ave. right near the hospital.

Also related to this site is Ireland House which has a story of it's own.

We are still very interested if anyone has another experience or more information to share about the Brant Museum. Please contact us at This email address is being protected from spambots. You need JavaScript enabled to view it.