Peterborough - Near The Otonabee River

The following was submitted to us by one of our readers. Please note that this area is rich in Native Canadian folklore, and legends.

I don't know if this fall in the category of a ghost story but it is true and it did happen to me.

In 1989 I was 13 years old. My friend and I would each day go to the woods by our house, and play and build forts. The wooded area was just off highway 115 in Peterborough Ontario next to Kennedy rd, and on the Otonabee river. It was also right next to the water treatment plant.

Nothing strange ever happened to us until one day my friend found a patch of large tomatoes growing along the fence line of the water treatment plant. I could not understand why and how they got there, but we started picking all the big red ones. They had to be and still are the biggest tomatoes I have ever seen!

As we filled our shirts I heard singing, and thinking it was coming from the highway I kept on picking. It was hot and sunny, and daylight, so the thought of ghosts was never a problem, nor even entered my mind. Then the singing started again, but this time it came from the tops of the trees, and seemingly all around us! It was loud, and sounded like older women singing together, something you might here in a church.

Well that did it for us, we dropped our tomatoes, and booked it down the path to get home!

The path had grass about 4-5 feet tall on each side, and we kept hearing it move like someone was shaking it or running through it. I was scared, so scared I was crying!

We got to the end of the trail on Kennedy rd, and stopped. We were tried to figure out what had just happened to us.

Five years later I was watching a TV show about witches. And in the tv show the witches sang the very same song while standing in a circle for one of their dead.

It took only a few months before I went back to the woods. and still today I never heard a thing like we had heard that day.

As a side note to this story a few years ago I was told by someone that a mother had killed her little girls in a house that once stood years ago..which makes sense to me since a lot of bricks, and parts of an old white picket fence are still there. They called that part of the woods Diamonds Run. 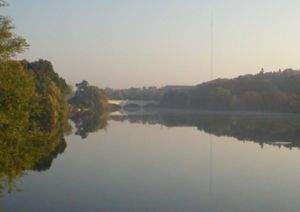 Our thanks to the witness for this report. Our investigator from Durham Region is following up, and we may update this report in the near future.

Since first publishing the above we have received another couple of interesting reports as a result of this one:

That's a really interesting experience. In some ways it reminds me of something that happened to me when I was younger, that was explained to me as being The Trickster (or The Old Man of the Woods). He lays tricks on people; singing or voices talking, the rustles in the grass like someone is after you or is trying to care you, but he would never hurt anyone; that was how one Aunt explained it. (Of course my Uncle said it was the indigo and I couldn't sleep for three days...) Given the Native history angle, that was what occurred to me. I really am looking forward to a follow up!

Up north of Peterborough...we (hubby and I) were snowmobiling years ago, and he and a friend decided to go across the lake to an island and see what's there. My hubby said that they were exploring the wooded area of the island when they realized the trees looked really old and gnarled, like old fruit trees, so they stopped and took off their helmets to look around.

That's when my hubby said they could hear a gentle noise, like voices from far away, that got closer and louder as the wind picked up in the trees around them. Just as it got loud enough that you might make out what was being said, the hair stood up on the back of his neck, and he motioned to his friend to start up and get out of there. I was watching from across the lake, and there was no one walking or cross country skiing anywhere near the island. During the summer the island is occupied, and we haven't been back in the winter since.


In June 2007 one of our Durham investigators (Mike) had a look around the area, and reported the following:

I found the site easily, but there was nothing similar to what the witness described. Perhaps back in 1989 there was less development there, but the banks of the river are well developed now with waterfront homes. There was nowhere on (or off) Kennedy Road to access the river - only the water treatment facility which was unaccessible. I drove around the residential streets (one street over) and that's where I got access to the river/area.

Did not find any trails or paths that could confirm the location of the report. There was a developed park area with a playground and groomed grassy areas - most likely for the residents enjoyment. Plenty of birds singing, likely a healthy frog population, and definitely noise from the plant and highway.


Our thanks to the witnesses, and Mike for following up.

Have anything to add? Have a report you'd like to send us? Have any notes you feel we might need? Please contact our lead investigator/researcher at This email address is being protected from spambots. You need JavaScript enabled to view it.