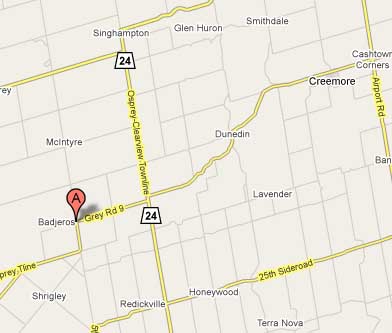 "I had a very weird experience that occurred very near the junction of Highway 124 (24) and Highway 9 not far from Badjeros Ontario heading towards Creemore.

This very odd "experience" happened on the Easter Weekend this year 2009... over near Blue Mountain. I was driving along when I needed to stop for a couple of minutes to answer nature's call if you know what I mean.  It was the middle of nowhere, and the time was about 10:30 at night so there were no public facilities to stop at that I knew about. I stopped at the side of the road and got out of my truck. At the time I was pulling a 30' trailer so I stepped between the pick up and the trailer and climbed over the hitch in order to relieve myself.

It was at this point that I heard what sounded like a weird fluttering sound all around me. At the same time it got almost instantly totally foggy. This misty fog got so bad, that I couldn't see the truck that was almost right in front of me. This freaked me out, and I fumbled to find my way back to the driver's seat.  Once I got comfortable I looked up to begin to drive away, and that is when I saw two women with long hair, floating in front of the windshield just looking at me!!!!

This totally freaked me out, and I put the truck into drive, and as soon as I did that they disappeared as did the fog!!!  I got home about 2 hours later and was still really wired about it, and told my wife what had happened. I have never seen anything like this before, and I will never forget it as long as I live. I want to know if anyone else has seen these two women or the weird fog on this stretch of road?"

Update November 2014
We received the following report in response to this story: Badjeros Sightings of 2009

My wife and I moved out to the country from the City of Toronto in 2003 and have lived in two areas Close to where this person experienced the encounter with the Ghosts in the Fog late at night near Badjeros in Grey County and Southgate just East of Highway 10 south of Grey Road 4 and West of highway 24 between Dundalk and Creemore.


I also have seen strange lights in the area at night and followed by a mist or fog and have heard several other Residents talk about seeing what look like people walking at night along the roadway of county road 9 in Grey County near Badjeros and just disappear into the darkness or fog that seems to follow.


My feeling is from speaking to native elders years ago who were traveling through that area and staying with Local friend near Dundalk, that much history of both native and non-native peoples existed in that area.


The headwaters of the upper Grand River start near Dundalk and not far from Badjeros and flow down stream To southern Ontario through Cambridge, Brantfiord, Caledonia and to Lake Erie. The ancient native hunting grounds And long houses were once located along the Grand River and Native villages lined the entire length of the Grand River at one time in the 1600 ­ 1800’s than European settlers came in and took parcels of the land to be developed As Farms and small communities.


The original natives in these areas had burial grounds that were sacred at the time and in some cases and locations Still are today and scattered throughout the upper Grand River areas and up through the Niagara Escarpment towards Collingwood and Creemore.


After hearing that it seems to make sense that many people could have been seeing and having experiences of seeing Spirits, ghosts, strange lights or whatever in that area due to the numbers of unmarked burial grounds or pioneer cemeteries In that area.


The area has now been settled mainly by Mennonites of the David Martin Mennonites who originated from the St. Jacobs and St. Clements areas of Southwestern Ontario, so if you see a horse and buggy in that area your not seeing things, it’s now The Mennonites who have settled that area.
Our thanks to the witnesses for sharing these experiences with us. If you have had a similar experience or can add further information please contact us at This email address is being protected from spambots. You need JavaScript enabled to view it. Your privacy will be protected, and confidentiality is assured.