This boxy, middle-class Georgian home is reputed to be the most haunted house in Toronto-- possibly the most haunted house in Canada. This is the historic home of Toronto's first mayor and rebel, the firebrand William Lyon Mackenzie; however, Mackenzie only resided in the home for about two years, from 1859 to 1861 when he passed away in his bedroom on the second floor.

Still, there are reported instances of eerie reminders of both Mackenzie, his wife and some children. The apparition of a small, bald man in a wig and frock coat is often seen around the home, especially in the third floor bedroom. This would be an apt description of the former famous occupant. Also, a woman with long hair has been spotted around the second and third floor areas. Cold spots and such poltergeist activity as footsteps and the printing press in the basement starting up have been supposedly reported by the staff and many of the tourists. Apparently, one of the more interesting things is the ghosts' reported near obsession with something that is relatively new in the house... the indoor plumbing.

The photos you see on this page were taken by Matthew, Tanya, Will and Susanne on a quick visit. The staff were very friendly and accommodating and have many excellent sources of literature on the "ghostly" topic. One piece of literature I picked up was "The Haunting of Mackenzie House & The Spirit of Mackenzie" written by Chris Raible of Creemore, Ontario. One of the many things I was not aware of was the exorcism of the ghost by Anglican Archdeacon John Frank with Telegram reporter Aubrey Wice. After this instance in late 1960, the ownership of the home was transferred from the non-profit group running it to the City of Toronto and listed in the inventory of the house's contents was "One Ghost (exorcised)". This would be only the second occurrence of ghosts being listed by official government document. (See The Toronto Island Lighthouse's Plaque). 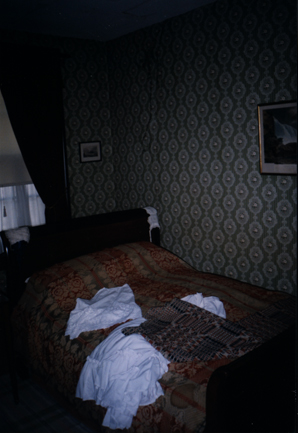 Toilets flush spontaneously and taps are regularly turned on.

Although on our last visit, we did not encounter any odd spirits except an image of what might be considered an "orb" 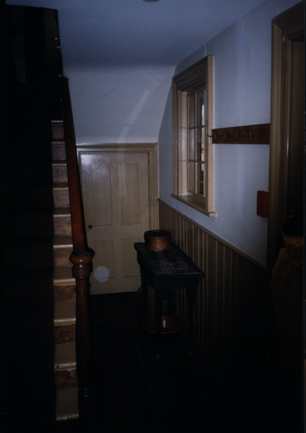 I assure you it was a reflection (although, and I will be honest, the image was taken in the basement and there did not seem to be any reflection at the time of the picture... still, it does look too much like sunlight reflecting onto a wall to me,)) we were welcomed warmly and the staff were very accommodating and helpful.

UPDATE: April 20th, 2003 In response to many people about the image above. The orb, after thorough examination of the photo and a repeat of the image taking process, the orb ended up being a back-lens reflection for sure. (The camera was an Olympus TRIP200 35mm Camera using a "fill in flash".) Also, many people reported seeing the "man" or "lion" face in the door. We can assure you that this was the natural wood-grain on the door (now painted a green colour) and was just a case of pareidolia. Still, it is interesting none-the-less. We didn't do this to debunk or make fun of anyone but to answer our own questions about what seemed to be anomalous phenomena.

Update: Jan. 2014 - The above note in reference to the orb was admittedly mistaken. Although back lens reflection was suggested as a cause by someone who is a professional camera technician by trade, we now realise that the greater likelihood is that the orb in the image is most likely an airborne particle of some sort which was reflected by the camera's flash into the lens from a close distance. Of note, however, is this image was taken by a 35mm camera using Kodak 800 35mm chemical film instead of digital for those that assume orbs are only a digital camera phenomenon.

Are there ghosts in Mackenzie house? Who knows... Not much death can be reported here but history does come alive when you visit. I would strongly suggest a step back into the past to find out about our history by spending a great afternoon or morning at this historic venue.

The following was sent to us by one of our witnesses...


I went to the Mackenzie House 14 years ago and to this day I have NEVER forgotten my experience there. I went with my father and sister just to get a feel for Toronto history ( we're from Toronto) I remember walking in the door and saying to the tour guide, before she could say anything to us, " Who died in this house?"

She stated, that William Lyon Mackenzie had more than likely died in the house, but there had never been proof of it.

Then as I was going up to the second floor, I had a weird sensation come over me..I looked to the second room and I saw a young girl (early teens) standing by the dresser..I was convinced that It was his daughter and the name Elizabeth kept popping into my head, Now the reason I'm telling this story is because I'm not sure if it was my over active imagination as a young teen myself or if it was real, I've experienced many things in my time but have never been quite sure if it was just my imagination or a gift. Another thing about the Mackenzie house was the basement ( where the kitchen is located). That room just freaked me right out! Even from the outside!

Our thanks to the witness!

Researcher's note: William Lyon Mackenzie did pass away in the house on Bond Street. However he only occupied it during the last couple of years of his life. Mackenzie, and wife Isabel had 13 children of which only six (four daughters and two boys) survived to adulthood.

A prominent Elizabeth in the Mackenzie family would have been his mother. This interesting item in regards to her was written up in Historical Narratives Of Early Canada

"She was sober and fiercely serious by nature, her features reflecting the furies fighting within her. She was a zealous Calvinist and extremely superstitious. The mystical was very real to her. She believed that every occurrence in her life augured well or ill and thought that with the death of every member of the Mackenzie clan, an omen was delivered. It came to surviving members of the family on the lips of a ghostly messenger whose visitation was accompanied by a strange, eerie sound."

Please note: Our friends at Pararesearchers have an excellent article about the house that's definitely worth the visit! 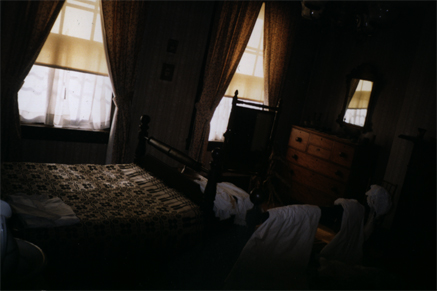 Update November 2014 - We received the following report from earlier this Fall...


"I was in Toronto for leisure and business and found Mackenzie house, so I decided to take a visit. When I followed the volunteer guide, I asked in Mackenzie's bedroom if there was any ghost stories. She said she didn't believe in such things and the initial story was fabricated to attract tourists. Then I started to feel something heavy on my back again. It happened before, not a pleasant feeling. There is definitely some ghosty energy there. Then I saw the ghost tale book and read it."