In 1976, the Ontario Heritage Foundation designated McMaster Hall a building of historic significance. McMaster Hall is now being restored, and the TELUS Centre for Performance and Learning is scheduled to open in 2007."

The following account of strange happenings was received in November 2005. In the witness' own words:

"I was preparing for my Grade 8 piano exam at the Royal Conservatory of Music in 1984. I would rent out a studio on a quiet Sunday afternoon to study. The halls were very quiet. There were two areas in particular where I experienced something present. There was a small window on the doors of the studios and chairs outside for people to sit. On one occasion, I was locked in concentration, working on one of my pieces. I could hear heavy footsteps coming down the hall. As the sounds got closer, I felt disrupted and a face appeared in the window. It then sounded as if someone sat down on one of the chairs just outside the door. Assuming someone might have booked the studio for study, I immediately got up and opened the door, but nobody was there. I was all alone on the floor and the hallway was quite long, the studios locked, so it was as if the person vanished without a trace. No sign of any physical presence anywhere. This happened several times in various parts of the building when I booked a studio. Most times it was very quiet, hardly a soul in the building. One time, however, there was a lot of physical activity in the studios, but doors tightly shut and people focusing on their studies. The footsteps, sometimes a door being tested to see if it was open, a face appears in the window to see if anyone was in the room, but no one was there when I opened the door. By my senses, I was expecting to see a very large or heavy man when I opened the door, but there was absolutely no one there.

On occasion when I was walking up the main staircase to the studios, I felt a presence behind me. One day, out of the corner of my eye, I though I saw a stocky person in a dark cape and top hat clutching his hand on the side rail and walking briskly up the stairs behind me to my right. He appeared in an awful hurry. I finally applied humour to the situation. I thought I know I am having difficulty trying to learn this Beethoven piece, however, I wouldn't think it would be so bad that Beethoven himself would come back from the dead to see that it got played properly. Of course, my music teacher at the time thought that was very funny. However, at the time I was experiencing this, I wasn't laughing. All I know to this day, is that the sounds mixed in with the everyday sounds of the conservatory and the footsteps were loud enough and brisk as if the person were approaching with great intention. Who knows, maybe the energy assisted in my pursuit of passing my Grade 8 exam, which I did despite it all. I put this down as a fascinating life experience that is very hard to explain unless you experience it for yourself."

Our thanks go out to the witness for sharing these unusual experiences.

Other reports that we have received over the years include: a female entity (according to the witnesses) and one is a poltergeist (felt, not seen) but again, is assumed by the witnesses to be female.

The two apparitions of a woman are described in either a red top or a red dress. She is seen in the hallways of the second and third floor. The other is "felt" as if someone is entering a room... and there's a change in the "environment" as if someone has now come in, but no one is physically there.

Update: May 2006 In May 2006 we received the following photo of parts of the RCM that were removed as part of current renos. Our thanks to Jamie Thompson, Photographer & RCM Faculty Member for his kind compliments to this site and his allowing are usage of this photo. You may visit Jamie's personal site here: www.shiningtree.org 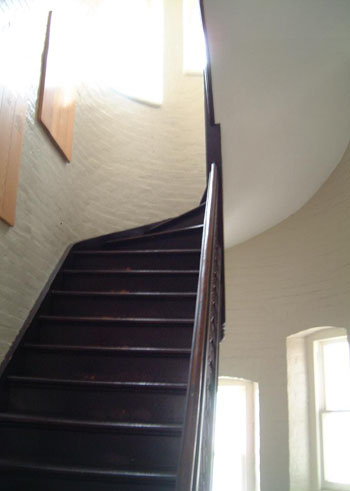 Update - November 2006 One of our readers writes:


I heard the same story about a woman who haunts one of the top floors at the RCM from someone who had no prior knowledge of your website. Apparently the caretaker staff have seen the apparition on more than one occasion, and it's a well-known story among the staff. Another interesting bit of trivia I learned is that part of RCM used to be a chapel, and there were corpses buried underneath. There's been a big renovation going on over the past year, where they're adding a new concert hall. It would be interesting to find out whether the workers find anything!

We would like to hear from anyone else who may have had a strange encounter at the Royal Conservatory of Music. Please contact This email address is being protected from spambots. You need JavaScript enabled to view it.

Members of Toronto Ghosts/PSICAN were invited to meet with staffers and document their own experiences as well as attempt some EVP recordings. We will update this page with notes from the primary visit along with any future investigations in the coming months. Much thanks to Ian and Daniel for allowing us this opportunity!