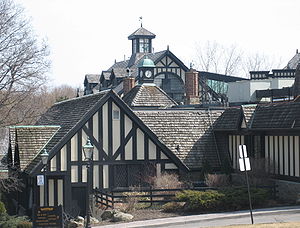 Since we needed to walk across the bridge to get back to the station, we decided that we'd inspect the area where the ghosts had been.  (The light had already turned itself on again and it never flickered the way you'd expect a dying lamp would.)
I had somehow thought that there might have been trees behind the bridge but there was nothing there that would have given the illusion of two figures, and certainly nothing that would have disappeared that quickly.
Feeling very uneasy and not wanting to hang around, I told my boyfriend that we should leave.  Walking up the stairs I half-jokingly added that the lamp might turn itself off again as we walk under it.