Fort Erie - March 2002 - Overnight New rule... NEVER, and I mean NEVER do an overnight in an historic fort against a large body of water on the coldest night of the year.

Friday, March 22nd, 2002, seven brave members of a GHRS crew (Matthew Didier (your humble reporter here), Sue Darroch, Lisa Reid, Stephanie Darroch, Peter Coffman, Lynda Quirino and Jennifer Krutila (who was the lead investigator on this trip,)) and psychic David LeFort (note: GHRS usually doesn't 'employ' psychics or sensitives but in this case, we had to make an exception... more on this later...) bravely sojourned to Old Fort Erie to meet with Sam (a worker at the fort) for an overnight investigation of the fort's not-so-infamous ghosts.

Armed to the teeth with extra sweaters, solar blankets, jackets, scarfs, mits, etc., etc... oh yeah, and three standard cassette tape recorders, one motion-sensitive security digital cam, many disposable 35mm cameras, three 35mm standard cameras, one low-speed, high-end 35mm camera, one camcorder, multiple flashlights and many much-needed coffees, one EMF detector and one lab thermometre, we started what would be a not-so-great investigation due to the bitter temperatures.

This year's unseasonably mild winter led us to believe that mother nature MIGHT cooperate and let us have a mild night during this off season visit to the fort but, to quote John Belushi, Nnnnnoooooooooo! Temperatures kept us pretty much glued together in one room in the South bastion near a comforting fire.

Oh, don't get me wrong here, it was a good night, Jennifer did a good job and things went very well but it was VERY, VERY cold!

As is customary for an initial visit, the "newbies" (people who hadn't visited the fort) and us old hands took a brief tour of the facilities. We were asked to fill out a questionnaire and were given the historical notes but those who knew (or might have known about) the ghost stories of the fort and David LeFort were asked not to discuss these feelings/reports with the rest of the other investigators who knew little of Fort Erie. Although Jennifer is still going through the questionnaires and information, some interesting things came to light during the "round table" after the initial walk about.

Although the standard "better known" ghost stories are those in the officer's sleeping quarters (top floor, South part of the South Barracks) and this was a key point for setting up the digital security cam and laptop. Oddly enough, though, this was not the main area of interest of the people during the initial "walkabout". Historically, the North bastion and building were the "hottest" as far as death and destruction go during the war but not really the main focus of the ghost stories BUT regardless of those that had gone before, the upstairs area of the South bastion (now the Fort's museum) peaked both Lynda Quirino's and David LeFort's interest as both had some experiences up there. The feeling was so powerful for Lynda that she was unable to stay in the room whereas David stayed but had a feeling of pain all through it. Both felt it most active. Sue also marked the room below and to the South in this barracks as the most 'oppressive' for smell and atmosphere. More interesting was Stephanie who found the kitchen (lower North room of the North Barracks) bad and was apparently "tugged at" twice (pulled on her jacket at the waist) by an unseen hand. This is interesting as none of them knew the history (yet) of this area and building.

Tape recorders were set up to capture sounds in the upstairs in two locations and although VERY faint, when reviewing, apparent footsteps and a "sweeping" noise is heard. Sadly, it's too faint for reproducing properly online and not steadfast data as it's very, very faint and although it is definitely from inside the building and we can account for all the "human" elements of our teams, there is always the chance that it's random sounds somehow carrying. Also, we suffered from extreme RF (radio frequency) interference from a nearby Buffalo radio station and sounds from the very heavy winds on the windows. We won't jump to any conclusions but in the future, better sound equipment will be brought into this room.

Click here to listen to (you'll need GOOD speakers to hear the sound) one of the weird sounds of which there is no "heard" sound of the door opening and closing downstairs (sound from the same tape, same side after "flipping".. the sound is the door as we left the recorder at 4:30am EST.) This, as you can hear, is a VERY heavy wooden door that made a HECK of a noise and is the only entrance and exit to the building. You can hear the RF interference but it's virtually impossible for this sound (and there's about four of these noises) to be made by a person unless they literally locked themselves in this building and hid from us just to make this noise after being silent for over 20 minutes and then maintaining silence for another 20 minutes at least. (We were using a Maxell UR Normal Bias 120 cassette sealed and factory fresh opened in front of two witnesses and loaded the same way into the machine.) 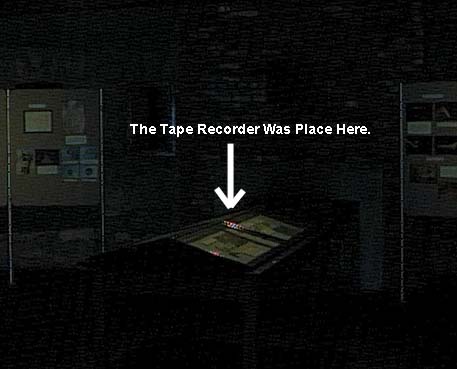 These possible anomalous sounds, on an educated guess, are coming from the South side of the upper story of the building as the recorder was on the North side at the end of the evening when these were recorded.

The long and the short of it is, either human (And VERY stealthy), natural or "ghostly" activity was afoot. In our humble opinion after reviewing the tape, wind and humans are fairly easily ruled out but as usual, we aren't committing.

Of note, on one "tape flipping" trip, Sue Darroch, Stephanie Darroch and myself went to this barracks at about 1am. I opened the door and audibly heard the "sweeping noise". I thought it might be the door so I held it in place and heard the sweeping and some shuffling footsteps. I was so sure it was another person (although it shouldn't have been due to our controls) and yelled "Hello!" three times with no reply. The sweeping and steps continued. I closed the door and let Sue try it. On re-opening the door herself, she too heard the sweeping and she too ensured it was not the door by holding it in place. It lasted almost a minute (as we sat and listened outside the door) but ceased when we all entered the barracks. Very odd. 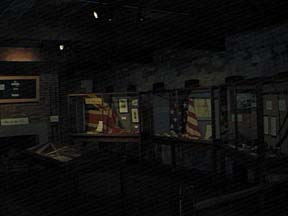 There are still several tapes to examine and possibly more will be revealed later... no promises though.

The other major event that happened was while doing the round table in the South Barracks in the lower-North room, we heard a very loud "bang" or "thump". It might have EASILY been the door to the Western gun redan that has a VERY small tunnel with a door at both ends and one MAY have slammed and as the temperature was so cold, we didn't have much "exterior" time to mark doors. There was a distinct odour of something like burning elastic bands but it's probably not an anomalous sound and was simply a door slamming in this mini-tunnel. (Although I think we all thought of "cannon" as our first guess but hey, we were hoping.)

We decided to forgo temperature readings as it was a given that the mean temperatures of the buildings was freezing and therefore "cold spots" would be almost undetectable. We did use our EMF detector and true to form, every room and area readings were done in came up zero. More and more we question the hypothesis that this instrument can truly detect paranormal phenomena. The security cam which was functioning fine during the "home tests", went wild at the fort and captured 369 images but all were negative. It's relatively easy to say this was equipment fault more than "supernatural" and before we re-deploy the cam, we will be looking into making sure it's working properly first and after and run some controlled experiments with it on site.

Although we had "icky" feelings in the same area that our sensitives picked up on and no "false" readings, none of us "saw" anything (that I know of) and overall, it was a long and very cold night. When new information is disseminated from the other tapes and film, we will be posting it here.

It was a "cool place" both metaphorically and realistically. If anyone gets the chance for a return investigation (or if we go back,) the North Barracks is the one place that did seem to "yield" the most but who knows... A full coverage investigation in better weather would be wonderful because if nothing else, we all agree that Fort Erie's ghosts have something to say to us.

UPDATE: April 1st, 2002 I have set up a "mini audio" bit that includes the final seven minutes of the first tape, side "B" that was recorded at about 1am - 2am. There are some more of these sounds that we discussed above but it gives you a chance to hear some of the tapes as we hear them.

WARNING: To truly hear the "interesting" sounds, a VERY good set of speakers should be used as there is a LOT of static and white noise to sort through and some sound systems may NOT be able to hear the sounds through the static. The only "solution" is an improved sound system for your PC. Extra "bass" and "sub-woofer" units may not be of assistance as it's in the high frequency ranges. NO FILTERING has been done on the initial seven minutes you will hear from the fort BUT they have been digitized to work with Microsoft Media Player. It's by no means perfect and is not offered to you, the listener/browser as proof of the paranormal or as "iron clad" evidence... it's strictly for interest's sake.

For me, the most interesting parts of ALL these sounds is that we can honestly say there is a 99.999999999% chance that there was NO human beings (nor animals of other sorts) in the entire building during these tapes. Imagine, a lonely tape recorder in an enormous, empty, cold, stone, War of 1812 barracks that was the seen of hundreds of deaths in the middle of a BITTERLY cold night devoid of people and yet... these weird noises. Very odd. I would say we were 100% sure of no human or animal intervention but in order to say that, a "guard" or security equipment would be needed and it was too cold for one and too expensive for the other for a preliminary investigation. Next time!

CLICK HERE to hear this audio. You will need Microsoft Media Player 6.4 or higher. (Seven recommended.). So use the links above in the text or use the icons below...