On our travels to The Joseph Brant Museum, Sharon Stevens (our contact,) mentioned another museum that sparked our interest, The Ireland House which is administered by the same organization as the Brant Museum.

Reports of sounds and "feelings of being watched" came in as well as doors opening and closing by themselves. Luckily, we did have the time to stop by and were not disappointed. 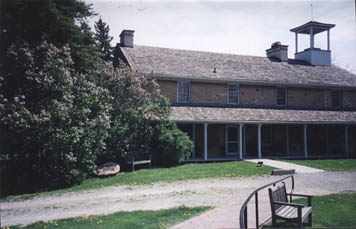 The house built between 1835 and 1837 was the home of Joseph Ireland, one of Burlington's earliest settlers and the home was lovingly handed down from generation to generation. It's last resident being Marie Ireland Bush who lived in the home until 1985. In 1987, it was purchased by the City of Burlington and is a spectacular spot featuring three different eras of the home. Almost all of the furniture is original to the house and the history and lives of this family are displayed in the smallest details. This museum/home is an absolute must-visit for the history buff and is definitely a "hidden treasure" in Ontario. From it's birthing/dying room to the indoor, three hole privy to the lushness of it's Victorian living room, this home radiates life in a bygone era... or eras.

It also seemed to radiate something else. Although the staff were not as receptive to questions about the paranormal as they were at the Joseph Brant Museum, we (Frank Correia, Tamara Zyganiuk of CSPI and Jennifer Krutilla and Matthew Didier of the Toronto Ghosts and Hauntings Research Society,) did notice a distinct feeling in the home. There did seem to be "something" there and all of us noted it. There was a distinct feeling on the second floor and on the stairs on the way up to it that was difficult to ignore. Not a "nasty" feeling but one that made sure you knew you were being watched. Normally, as regular readers of this site know, we wouldn't put much stock into this but after spending the previous day and the previous hours touring "haunts", we all noticed that this place, more than the others, had this "feeling".

Aside from the paranormal, I cannot fully explain how much a visit to this house is well worth a trip. It's history and beauty are exquisite.

We, if offered, will definitely be back at the house and hopefully will be able to do a quick investigation.


The following reports came in from one of our site's readers...

The piano at the far end of the dining room was brought to Ireland House when Lucy Springer married George Ireland in 1917. She taught voice and piano from the house as well as being the pianist, organist and choir leader at St. John's Anglican Church on Dundas Street.

One particular Christmas celebration in the house, one of the volunteers was standing beside Lucy's piano with a friend singing Christmas carols. The main lamps over the dining room table which were once kerosene, are now electric and therefore should be shining at the same time. However... when they sang while standing beside Lucy's piano, one half of the light went out, and when they stopped singing, it came back on. Supposedly, this occurrence has so disturbed one of the carolers that she won't sing at Ireland House any more.

Another report at Ireland House is the story of one of the interpreters walking through the dining room at night and meeting with a soldier dressed in the uniform of 1812. Hanging on a beam overhead in that spot is a saber which John Ireland (brother of Joseph who built the house) carried in the war of 1812. There were, at one time, a number of weapons from the same war hanging on the beams. These have since been taken down and stored away.

A young volunteer was working in the parlour winding the clock, while another volunteer was across in the modern building with an interpreter preparing for a programme. The young fellow came running over from the old house to report that he had seen the reflection of Eliza Ann (Naisbett) Ireland in the mirror in the parlour.

Eliza Ann was married to John, they were the second generation to live in Ireland House, during the last part of the 1800's.

As usual with this site, the reporter said that people who are alone in the house feel that they are not alone, but it is a friendly feeling. This seems to be a common comment about the house.

One of the volunteers told the author of the report that she was in the house alone and had just come through the 1920's kitchen. There was a clear path to the doorway of the dining room. A few minutes later when she turned to take the same path through the kitchen she tripped over a chair that had been placed in her way.

The author of this report said that in their experiences, the past presence of the Ireland family stay quiet while there are "visitors" to the site. A visit to their home is a wonderful experience and so much a part of Burlington's history.


We are very interested if anyone has another experience or more information to share about this historic home. Please email us at This email address is being protected from spambots. You need JavaScript enabled to view it.