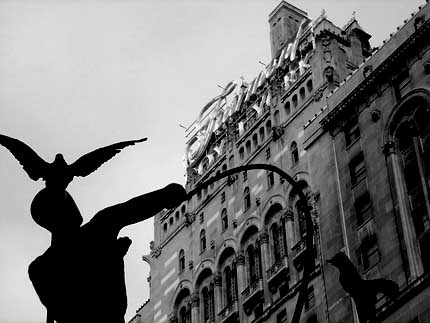 One of the cities most enduring landmarks and at one time, the tallest building in the commonwealth, The Royal York's opulence still survives even though it has been dwarfed by the other towers of the city of Toronto.

Such an old and entrenched landmark does have it's one lonely reported ghost that can be found in the pages of John Robert Colombo's book, "Mysteries of Ontario".

According to the book, an apparition of a grey haired man appears in a maroon smoking jacket and slacks silently moving along the hallway of the eighth floor of the dormitory tower.

The following was submitted by one of our readers...

There is also supposed to be a ghost of a former employee who hung himself from a stairwell railing above the 19th floor.

As you may know the hotel has only 19 floors which are occupied however almost all the stairwells lead to the upper roof (20th-23rd floors). These upper floors are occupied by mechanical rooms which are all electronically locked and only entered when work must be done.

The stairwell in question (I forget the actual stairwell number) leads right to the roof exiting to the big red ROYAL YORK sign which can be seen from the streets. As I mentioned, the employee hung himself for an unknown reason in the higher area of this stairwell.

Many of the maintainence staff at the hotel have stated that strange sounds such as screaming and loud footsteps can be heard above while climbing the stairwell. When the sounds are investigated nothing or nobody can be found.

The stairwell is locked at the roof exit and is alarmed with a movement sensor and a video camera to catch an imagine of any unwanted visitors which may climb the stairwell to high. When theses noises are said to be heard the cameras are checked along with the alarm system, yet no activity in the area is found.

In the few times I have been up in that stairwell I have not experienced hearing any noises as explained above, however I do recall one evening I was descending the stairwell when I began to feel very nervous as if someone was watching me or following me. I ran down the stairs and exited onto the 19th floor, where I began to feel safer.

After talking to people regarding the 8th floor ghost, and explaining to them what I experienced in that stairwell I was told about the employee suicide in that area and all the strange noises heard as explained above.

I double checked the story with a trusted employee of the hotel and found it was true that the male hung himself approx. five years ago.

P.S - the 8th floor ghost is true... at least I hope it is or I'm going crazy. Walk the floor at night and tell me if you sense that your not the only on the floor. There are staff members who refuse to go on the floor during the midnight shift for that reason.

UPDATE: We've recently heard that technicians working in specific parts of the hotel that have had equipment fail and strange fluctuations in the electrical current have pinned the blame for these odd occurrences (jokingly,) on the ghost. In one case, one technician, who'd made 'jokes' about the antics of the ghost with equipment wrote to us to voice his surprise at the fact that up until discovering it on our site, he didn't really acknowledge the absolute validity of the stories of the hotel's "ghostly history". He says he's experienced cold spots and odd gusts of air in parts of the hotel. To top things off, this fellow also mentioned knowing another staff member who actually had seen the ghost of an old man passing through an area of the ballroom.

We are still looking into the rather long staying guests and if you can help or have another tale from this fine hotel, please email us:  This email address is being protected from spambots. You need JavaScript enabled to view it.


We received the following report in February 2010

We stayed on the 8th floor at The Royal York this past weekend.  Our 10 year old daughter pressed me if I felt the ghost,
because I have a certain sensitivity to such things.   Not wanting to "spook her" while we enjoyed our vacation, I told her
no. This morning I admitted to her otherwise, before I checked your website.  I said that though most hotel mischief tends to be caused by "little girl ghosts", this was definitely a man.

Among the oddities we experienced was the elevator doors repeatedly opened & closed at will, until we thought it best to vacate.  An alarm clock buzzer went off Saturday morning for 30 minutes in the adjoining room, though we were at the end of the hall & no guest room was located there.  Our electronic room key malfunctioned not allowing us to enter after a morning swim.  But most compellingly, our daughter said she saw "moving shadows" in our room while her mother napped & I was in the  bathroom.

I talked to my daughter further about her experience & she elaborated that the outline of what she saw had "humps". One was what she perceived as a head & another as though it was hunched over.  When she called for me, she said it "whooshed away".

She also told me she felt something next to her bed, just before the alarm buzzer went off Saturday at 7 AM in the next (non guest) room.  Her only concern about her encounters was whether or not the ghost could tag along home with us.  I assured her it couldn't.

Never was there a sense of danger or high anxiety, only mild unease, and other than that we had a fine time.  This is the first indication that our daughter shares my "gift" and is just not emulating daddy."

Our thanks to our reader for sharing his family's experiences at the hotel with us. We appreciate it, and hope that by sharing these types of events others who may be experiencing something similar can take some comfort in knowing that they are not alone. Have you experienced something that may be ghost related at The Royal York? If so, please contact us at This email address is being protected from spambots. You need JavaScript enabled to view it. Your privacy will be protected, and confidentiality is assured. privacy will be protected, and confidentiality is assured.

One of our readers shares the following.......
"I am in the process of booking a room in Toronto for my son's wedding - many of the other guests are booking at the Royal York.  However..... I did stay for 2 nights at the hotel about 12 years ago and had such a bizarre experience, that I thought I would check the internet to see if there were any other similar experiences.
The first night I spent in the hotel, I had felt a strange sensation of electricity through my body as I was falling asleep which woke me.  Each time I started to go to sleep, the weird sensation would occur, and I started to feel as though I was 'lifting' off the bed.  I had a very real dream of trying to go into the bathroom, where there was a strong force pushing back on the door.
I didn't sleep much; but I did simply assume that I was having weird nightmares (and no, I had not been drinking)
Until the second night when I experienced exactly the same thing.
I turned on the lights and the television and didn't bother to try to sleep anymore.  I nearly told the girl at the desk in the morning - but who wants to look crazy?"

Our thanks to our reader for sharing his family's experiences at the hotel with us. We appreciate it, and hope that by sharing these types of events others who may be experiencing something similar can take some comfort in knowing that they are not alone. Have you experienced something that may be ghost related at The Royal York? If so, please contact us at This email address is being protected from spambots. You need JavaScript enabled to view it. Your privacy will be protected, and confidentiality is assured. privacy will be protected, and confidentiality is assured.


In November 2015 we received the following from visitors to the Royal York:
We have just returned from a four night stay at the royal york hotel and due to strange happenings decided to google the hotel and come across your info ... And it all explains it to us! We are amazed.
We stayed in 17th floor room 39 and my fella wondered why there were two room numbers missing 37 and 38  ... Porter said as room have been made bigger? Could be true but thought it was worth mentioning.
Anyway, as I approached the lifts in first day I could see a hazy figure, I saw it a few times but on this day, one particular lift wouldn't work for us and the others just wouldn't come. We would get in the lift and it made the sounds of moving only to open on the same floor ... 15 minutes of this!
The next day my partner moaned about not sleeping due to the children running up and down corridor ... I mentioned we should tell the reception and he replied he had looked out spy home and opened door and couldn't see where they were from as gone. It was 1:am. It happened again on third night at 3:am but he said when he looked through spy hole he saw a man (grey haired) in a waistcoat ... Red at front and purple shiny back ... He thought it was a bell boy sent to hush the children!!  We joked it felt haunted! He describes it as at least 4 children. Got home and your stories match!!