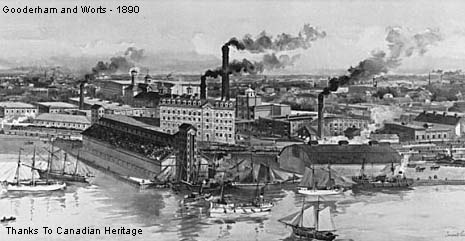 We received the following account of ghostly happenings in 2010, but the actual events described happened a few years back.

"Hey, I noticed you have some articles on the Distillery District and I thought I'd let you know of a couple of things I've seen there.

I worked at the Boiler House (restaurant) for three years.  I was part of the team that really opened the restaurants there, beginning the first fall they were open.  The Boiler House is divided into two parts, main level and upstairs mezzanine.  On the south wall of the restaurant is a decorative wine rack/shelving system that extends to the ceiling (I'd say 30-40 feet).  One evening, before dinner rush, I was upstairs in the mezzanine with my co-workers, polishing the silverware and glassware for the evening's dinner rush.  Most of the time when we do this we're laughing and joking around.  It started off that way until one of my co-workers completely froze up.  The colour dropped from her face and she started trembling.  I asked her, 'What's wrong?  Are you okay?'  And she looked me dead in the eye and pointed towards the wine rack/shelf and said, 'Do you not see that?'.  I looked over, didn't notice anything unusual, and said, 'No, what do you see?  What is it?'  She responded with, 'There is a man, hanging by his neck above the bar.'  She packed up all of her things and left.  Haven't seen her since.


Another time, during a full dinner rush, another peculiar thing happened.  That shelf/wine rack I was talking about has decorative promotional wine bottles on the top shelves.  They''re glass, like regular wine bottles, they're just bigger.  Let's say they're 3 feet tall.  Anyways, during dinner rush, one of the customers from upstairs shouted 'WATCH OUT!'.  I was on the ground floor at the time and looked over and saw the bottle mid-flight off the shelf.  I've never seen anything like it.  The bottle flew away from the shelf, perpendicular to it about 4 feet and then dropped, straight down, rigid in angle, and landed flat on the bar.  Didn't break, didn't wobble.  Just landed."

Our thanks go out to the witness for sharing these experiences at his former place of employment with us. Have you encountered something similar in the Distillery District? Do you feel you may have further information to add to this report? If so please contact us at This email address is being protected from spambots. You need JavaScript enabled to view it. Your privacy will be protected, and confidentiality is assured.