Another Orb Article - Including the Dream of the Obscured Orb Photo

Please Note: This article is a few years old and came before our article on orbs that we consider the "final" article. If you wish to read the "final article", please click here or read this article and use the link at the bottom of this page.


I wanted to add some stuff to our regular "orb" editorial that may be of interest to some.

First, something from the FAQ... It applies now still as I get people asking me about the "Flashlight Test" for dust and pollen before taking 'orb' shots...

To address the "flashlight testing" that I've had a few e-mails about.

The idea that a few folks suggested was to shine a flashlight into the area you're about to take a picture of and look in the beam for particles that could corrupt the photo. The idea is, if the "tester" doesn't see any particles, all orbs, mists and vortex-like things MUST be anomalous.

Apparently, according to three of our photographic folks here at the GHRS, you would need two to four million candle power to produce the intensity of a flash of a camera and then you'd still have to allow for dust, pollen, moisture and insects that might after the tests come into the frame.

Also, after speaking to an optometrist, we discovered other flaws with this. The main one would be not allowing your eyes to adjust to a bright light of such a flashlight. The average person would need to expose their eyes to the light for about three to five minutes which, according to our expert, would damage the cornea and iris of an eye badly. Basically, the doctor we spoke to did not recommend this.

Also, you may not see particles that tiny even with a flashlight that the lens will see as the lens could be literally millimeters from the particles that produce orbs and anything that small as close to your eyes would be "focused out" by the optic nerve. [EDITORS NOTE: See my recent image of 'orbs' at Fort Erie by clicking here for an example of this. This link opens a new browser window.]

Therefore, the only acceptable means of trying to capture anomalous orbs is to simply try, keep track of environmental issues as best as possible and realise that this is not and should not be accepted as "evidence of ghosts".


Now, to add to the general notes, I've often 'asked' for an orb photo that is obscured behind something solid. 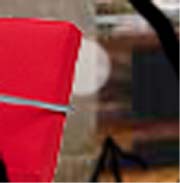 Above is a "hoax" of sorts. A kind of obvious one I built to illustrate what not only myself but a lot of researchers would love to see... Not only is my home-made orb obscured behind one thing but it's also visibly in front of another. This allows the researcher to see the depth and the distance of the orb. (Click the home-made hoax above to see a larger version.)

While going through my old photos, I came across this image from my household's Halloween Party from 2001. The fellow pictured here (who's remaining anonymous) is dressed as a character from "Logan's Run" (who remember's this, eh?) and if you look on this fellow's right hand side, you'll see an orb or two. I can ALSO guarantee that these orbs, if my friend was positioned properly, could have become obscured! But, click on the image and see the larger one to see the source of these orbs.

Oh well, perfection is (and in many ways should be) an impossibility.

Here (bellow) is another orb photo taken during the same trip at which I snapped the whack 'o orbs at Old Fort Erie (see link above). This orb was taken at a rather wonderful old abandoned building in Niagara Falls proper near the bus and train stations. (We usually take the train to the falls... a great way to travel!).

Now, this orb ALSO had a relatively easy explanation (if you click the image above, you'll see it) as the sun (light source) was slightly in front of my lens. It is a case of back-lens reflection without a doubt as in the whole photo, you see the "rainbow" around but slightly off-centre from the orb. This is the sun basically bouncing-off the lens and then reflecting back onto it from the inside of the camera. Still, interesting orb but the building is MUCH more interesting... I don't know the history of it but both Sue and I love the place just for it's atmosphere! Remember... Creepy does not equal haunted though!

Anyway, I shan't rant anymore about orbs for right now and I thank you for reading through my usual rants.

I do remind the reader, I do NOT say that orb photos are all fakes or bunk and I don't say 100% sure the "Orbs do not equal Ghosts" but I do say that this phenomena cannot really be qualified as definitive 'proof' of a haunting as this type of photo anomaly is a little too easy to mistakenly capture. Before you leap for joy and think that you're orb photos show for sure that your home or whatever is haunted and HERE'S the ghost, step back an make 110% sure that the orb isn't natural in origin.

Heck, even Art Bell is no longer accepting 'orb' photos as submissions because of this.

Me, as of now, I'd like to bring your attention to my "hoax" above and note THIS is what we're truly looking for... I'm not TRYING to be a jerk or debunker but say that I believe in ghosts and as a TRUE sceptic who needs not only to "see to believe" BUT to "see to disbelieve" too, we have to scrutinize our data for both pros and cons.


Nota Bella: A few folks have submitted images that do seem to be obscured at a tertiary glance but on examination, either because the "solid item" the orb is obscured by is sheer or very light in colour, when the photo is blown up, the 'edges' of the orb are visible in the foreground making it appear at a glance to be perfect but under a little extra observation... nope. Same goes for "orb covering orb".


Update: September 26th, 2002 Sue and I have been doing a LOT of extra work mostly with some theories on EVPs and continuing our EMF work. We've been out and about (and running ourselves ragged) to every 'open-to-the-public' haunt in Toronto and the GTA starting the compilation of data. The picture show here is Sue at Fort York where we started some (very gentle) EVP experimentation in the centre blockhouse, second floor.

While there, we, as always, snapped more than a few photos as well as taking our EVP recordings... The photo shown below was taken, more or less because on a previous visit to this structure, RFC (Richard Fiennes-Clinton), Sue and myself all commented on how 'smart' we thought the uniform on the left (The King's 8th Regiment of Foot) looked with it's black facing.

Well, in the image, on examination once home, we saw the 'orb' which is highlighted(?) in the box. Now, this is a 'known haunt' and the centre blockhouse has had more than it's fair share of reported phenomena but is this a ghost? 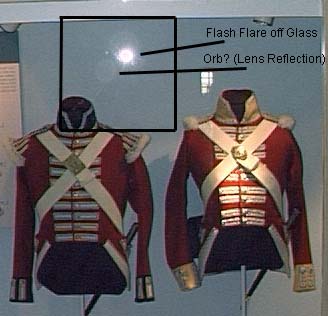 Well, no. At least, I'm 99.99999999% sure it isn't. As you can see, although we were in a closed room that SHOULDN'T produce a lens flare, the glass case did. The flare is VERY obvious. Next, it appears that we have a back reflection (note the flare and follow the echoed images of the light and you'll see the 'orb') causing the orb.

Well, it's not quite a case of mistaken identity and truly, the ONLY reason I bring this up (and show the image) is because both Sue and I commented while there that the place is not as 'packed' with tourists as one thinks on weekends and we were able to really get some good work AND readings without disturbance... (hint-hint, to anyone doing research... We just went in at around 3pm on a Sunday and set about the work.) I would caution people, however, a welcome can soon be worn out. We do our best to cease data collection and go into 'stealth' mode when tourists did enter the buildings we were in AND we never use equipment that could cause ANY damage to the buildings (such as a tripod on a floor or the like) so if you do venture there, and we HIGHLY recommend it, be respectful and remember that although not 'ghost-unfriendly', the staff there are not 'ghost-friendly' either and the 'paranormal' is NOT an official part of the tour there. If you're heading there, remember to take your OWN notes and if you do the paranormal investigation thing, be respectful and gentle and remember, try to take away more than a 'cool ghostly experience', try also to take away the story of the ghost as for it's (his' or her's) historical experience.

Last note... The above (except for the evidence) is my opinion only and DOES NOT represent the GHRS membership or even all of it's directors.