Sue from ParaResearchers and I spent a... well... interesting weekend in August of 2002 at the re-enactment of the Siege of Old Fort Erie which was AMAZING!

Our friend, Kyle Upton did a bang-up job announcing the battle and it's key moments as he always does and although, to the best of our knowledge, he was not part of the actual 'aftermath' of the re-enacted battle, he did announce the special "Candle Light Tour" of the fort which was complete with dozens of historical interpreters and re-enactors doing the things the poor soldiers after a battle would be doing from being interrogated by enemy guards to having various bits of their anatomy lopped off by the surgeon. (Special 'kudos' to Vicki and friends for their job looting the kitchen.)

The battle took place on the field near the famed 'haunted fort' with about four hundred re-enactors and folks from the different forts in and around Niagara. The "British/Canadian/Native" warriors were topped off with four rather loud pieces of artillery which made for quite the racket. An excellent time for re-enactors and public alike with the 'excellent' carnage leading up to the Candle Light Tour.

Well, en route to this tour (read: in the massive lineup to see the tour), I snapped the image shown below. The group proceeding us into the fort for the tour below was made up of teenaged re-enactors (that's the dimly lit folks in the interesting outfits I snapped) and when I downloaded the image onto my laptop... ORB MANIA!!!!! (...and blue orbs too!) 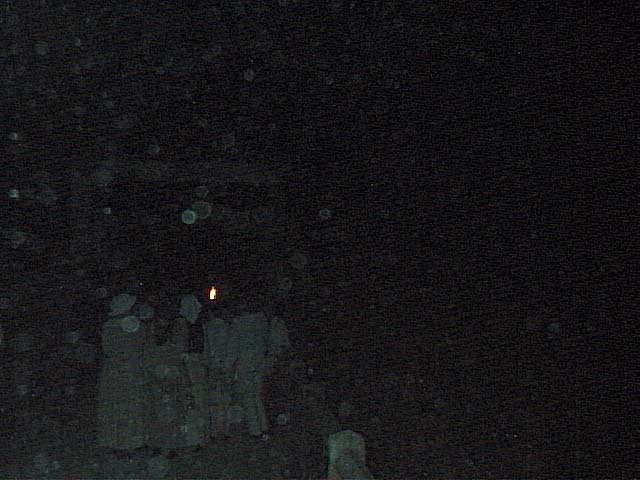 Well, is this a veritable plethora of ghosts!?! Is this the spirit orbs of the dead nineteenth century soldiers come to visit the "best part" of the day hoping to get mentioned!?! (By the way, the candle light tour did not touch on the ghost stories of the fort but a group of young men we met will be doing ghost tours throughout October AND even in the Old Fort Erie gift shop, they sold 35mm film and disposable cameras with a notice "...and maybe captured a ghost!")

Honestly, I doubt it. You see, even though no 'dust particles' were openly visible to our eyes even with bright torches and the occasional flashlight, my black shoes had turned a wonderful shade of pasty-white grey from the dust on the path into the fort. In all honesty, despite the ghosts at Fort Erie possibly making a presence felt and despite the many people that say "Orbs is Ghosts", this, my friends, is powder-like dust. White clay-like powder dust and for the record, I shot TWO pictures before this from roughly the same spot with no orbage to be seen but I can attest to the fact that a few people HAD scurried by before taking this picture (because of the re-enactors, I waited until the 'normal' dressed people were out of the shot.) For another note, my digital camera's flash SUCKS (no kidding, eh?) so that's why the re-enactors are without real light exposure.

NOW, being me and not being able to say ABSOLUTELY that these are not "ghosts", I do have to say this... I am pretty sure... nay, 99.999(ad infinitum)% sure that these orbs, despite the location, despite the timing, are dust particles.

Is Fort Erie 'haunted'? I'd say yes and it certainly deserves to be. Are these orbs ghosts? I'd say no.

Nota Bella: Although the 'orbs' are overlapping each other, there is not one in this mess that is half-obscured by a solid, tangible object. All of these orbs are VERY close to the lens and therefore the flash. The 'bright light' that you see near the centre to the left is a lantern.

If you'd like to rebut or comment, send your thoughts to This email address is being protected from spambots. You need JavaScript enabled to view it. and I'll be sure to read 'em!